Home > myRavenna > City of art > Ravenna in 3 minutes: what to do and where to go 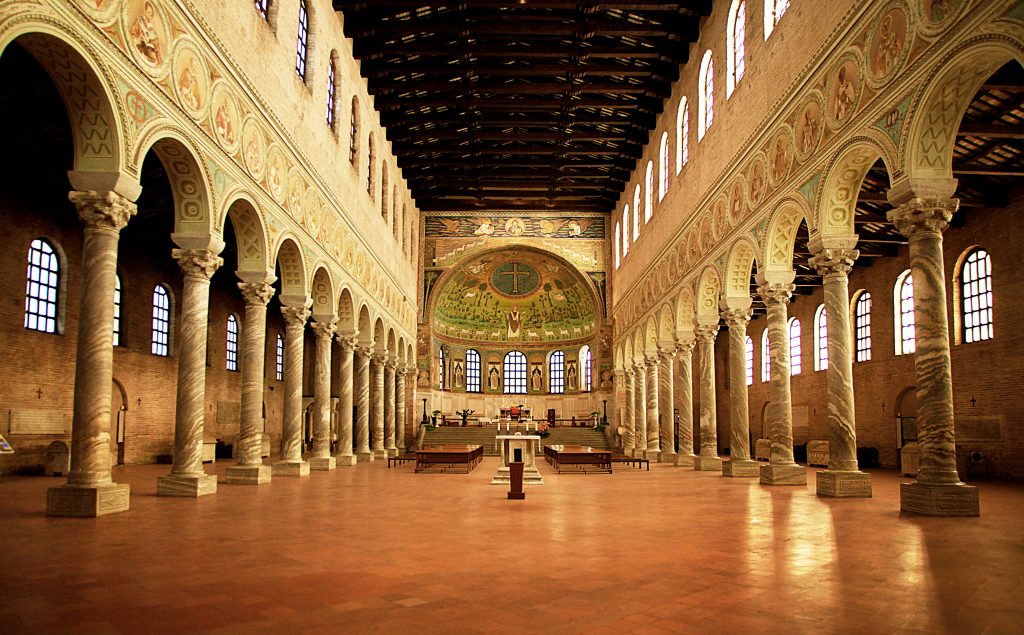 When I want to understand the history of Italy, I take a train and I go to Ravenna
Arnaldo Momigliano

Just a few kilometers from the Adriatic Sea, and poised between East West in the heart of Romagna, Ravenna is a city that manages to SURPRISE with discretion and graciousness.

Seven of its eight UNESCO World Heritage monuments have for 1500 years jealously guarded an unrivaled treasure. Precious tiles that with their multi-coloured combinations recount the artistic splendour of a city which, between the 5th and 6th century AD, was one of the most important centres of the known world.

Three times a capital (of the Roman Empire, of the Ostrogothic Kingdom, and of the Byzantine Exarchate), Ravenna hides behind the apparent sobriety of its palace facades an immense richness of details and stories to hear. Bicycles that dart to and from, the clanging of bells, and passerbys standing still engaged in conversation in Piazza del Popolo, the city’s main piazza – the civic center of a social reality that, while apparently similar to others in Italy, displays an unexpected dynamism.

Everything starts with the mosaics. They are the centerpiece of everything, a blessing and a curse for this city. There are many itineraries and they are not always linear. There are those who let their souls be moved by the stars in the Mausoleum of Galla Placidia or by the magnificence of the Basilica of San Vitale; Then there are those who lose themselves while rotating their bodies and heads to observe the domes of the Neonian Baptistery or in the Arian Baptistery; those who walk, back and forth, gazing at the processions of martyrs and virgins of the Basilica of Sant’Apollinare Nuovo; and again those who compare the privacy of Saint Andrew Chapel to the majesty of the Basilica di Sant’Apollinare in Classe.

Groups of tourists stand motionless in front of the imposing Mausoleum of Theodoric, which is also a UNESCO World Heritage Monument, while others seek out a direct contact with history by visiting two of the most important archeological sites uncovered in Italy by the end of the past century: the Domus of the Stone Carpets and the Ancient Port of Classe.

An area in the heart of the city, with its markedly medieval tracts, reminds us of its strong link with Dante Alighieri: Here we can find his tomb, the Basilica of San Francesco which was very dear to the Poet, the Old Franciscan Cloisters, and the brand new Museo Dante. To this we can add, a couple of hundred metres away, the old Camaldolese monastery of the Classense library, with the Aula Magna and its rich literary patrimony, headquarters of one of the most important libraries in Italy.

Ravenna is in essence a mosaic of art and beauty: a tour through the streets and piazzas of the city centre, a walk among the city’s monumental gates with a break in front of the Palazzo Comunale; the mosaic artisan workshops scattered around the historic center; the Teatro Alighieri Theatre and the Rasi Theatre; and then the Garden of Forgotten Herbs, Palazzo Rasponi dalle Teste, the greenery of the Public Gardens behind the MAR – Ravenna Art Museum, the Rasponi Crypt and the Roof Gardens of Palazzo della Provincia, the Rocca Brancaleone built by the Venetians, the Basilica of San Giovanni Evangelista and that of Santa Maria in Porto Fuori and lastly a walk to the Darsena area to see one’s reflection in the waters of the Candiano Canal, the past and the future of the city.

There is certainly no shortage of museums in the city. Starting with contemporary art, the MAR – Ravenna Art Museum hosts permanent collections and high profile temporary exhibitions. Walking further into the heart of the historic centre, you come across the National Museum, which retraces the history of Ravenna through relics from the Roman and Byzantine era, along with others; the Tamo Museum represents a true tour throughout the world of mosaic art; the Archiepiscopal Museum hosts many collections among which is the famous pulpit of Maximian and the Saint Andrew Chapel; furthermore there is the Museo Dante, the Risorgimento Museum and the Small Museum of Dolls and Toys.

And then there’s the street museum, free and open to everyone, which collects famous works of street art spread throughout the streets of the center and the periphery, with some works by the world-known French artist Invader.

The charm of the city is also due to the beauty of its territory extending far and wide near the Adriatic. Nine bathing establishments with different stories and characteristics dot the coast. A place to walk along in summer and winter, a lovely place to see and live.

Nature and hiking lovers trek along the Lagoons of Comacchio and the historic Pine forests of San Vitale and Classe and in the hinterlands the Romanesque parish churches, and the traditional enogastronomy complete the picture of a city that is wonderful to lose oneself in.

The International Airport of Bologna “Guglielmo Marconi” is 90 km away from Ravenna and is approximately an hour’s drive away, even by shuttle and private transportation. During the spring and summer periods the shuttle service is active.

You arrive in Ravenna via the A14 highway from Bologna, in which the A1 del Sole, A21 Torino-Piacenza, and A22 del Brennero highways meet. (www.autostrade.it) Departing from Venice the fastest route is the SS309 Romea public road, which connects the roads from Padova and Ferrara (SS16 Adriatica) while from the South the E45 connects the city with Rome crossing through the Apennines.

From the train station of Ravenna, only 200 meters away from the historic center, you can reach the railway hub of Bologna in an hour and from there you will be connected to the rest of Italy and Europe www.trenitalia.it.

10 things to do in Ravenna (almost) for free: a low cost tour

Natural spots to discover in Ravenna