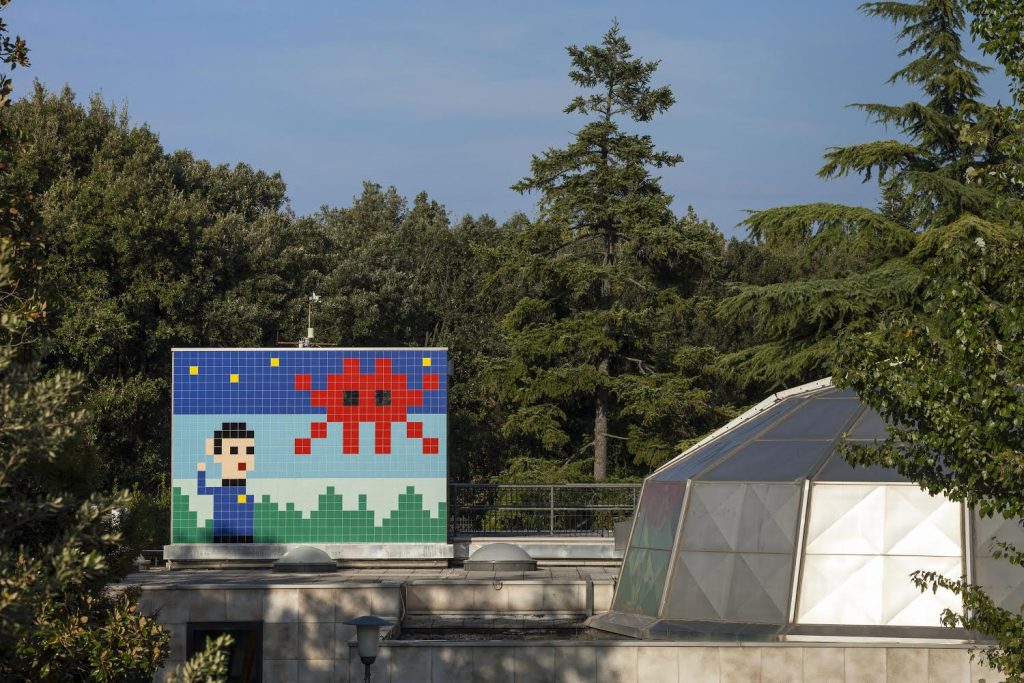 Does the name “Invader” mean anything to you? People who aren’t aware of the name of this French artist may instead know about Space Invaders, the Japanese videogame from 1978 which inspired him.

Invader is a French artist known the world over: many of his works are in Paris – where he lives – but they may also be discovered in many of the world’s metropolitan cities, such as New York, Bangkok, Marrakesh, and São Paulo.

In his website, he calls the artistic incursions into the cities that he visits “waves”, and Ravenna has already had the privilege of hosting two of these waves: the first one in 2014 and the second in 2015.

His artistic technique involves the installation of colored bricks that create small mosaic-like depictions, as if they were pixelated.

The first official visit was the result of an invitation by the association Pianeta Marte, which requested that the artist make a work for the Planetarium of the Public Gardens. For the occasion Invader created a 20 square meter mosaic depicting Spock, the icon of the Sci-Fi TV series Star Trek.

Invader seems to have been very impressed by the city, which inspired some other small installations of his works in the streets of the center and its surroundings. All in all, the artist has left 40 works in his two “waves” and, as stated on his website, in Ravenna it is possible to score 1550 points: every time that he creates a work of art, in fact, he decides to attribute a score to it ranging from 10 to 100.

Unfortunately, some of his works are no longer visible. Several have been removed due to the fact that they are not “official” works and thus did not acquire the necessary city permits, as in the case of the mosaic depicting Justinian and Theodora, which was created in Via Galla Placidia and later removed.

Despite some removals, there are still many street mosaics by Invader to discover in Ravenna and its surroundings, placed in strategic locations. Hidden around the city, some are easily identifiable, while others mix into the colors and signs of the city.

Trying to find them is very stimulating, especially if you choose to download the game FlashInvaders, created by the artist himself. This app makes the search for his mosaics seem like a real treasure hunt! Every work that is photographed gives the player points and the picture is then posted to his official site in real time.

New Mosaic of Ravenna was an important exhibition that Invader took all the way to Hong Kong in 2017. The exhibition featured photos of the Ravennese installations and 25 deluxe editions of the guide New Mosaic of Ravenna, the 7th printed work of the artist. The guide, in the normal edition, has been printed in 1500 instances along with a map indicating the positions of all of the space invaders.

The streets of Ravenna, capital of the mosaic and attentive to new forms of arts, are the ideal place to discover this artist!

How many works by Invader do you know about in Ravenna?