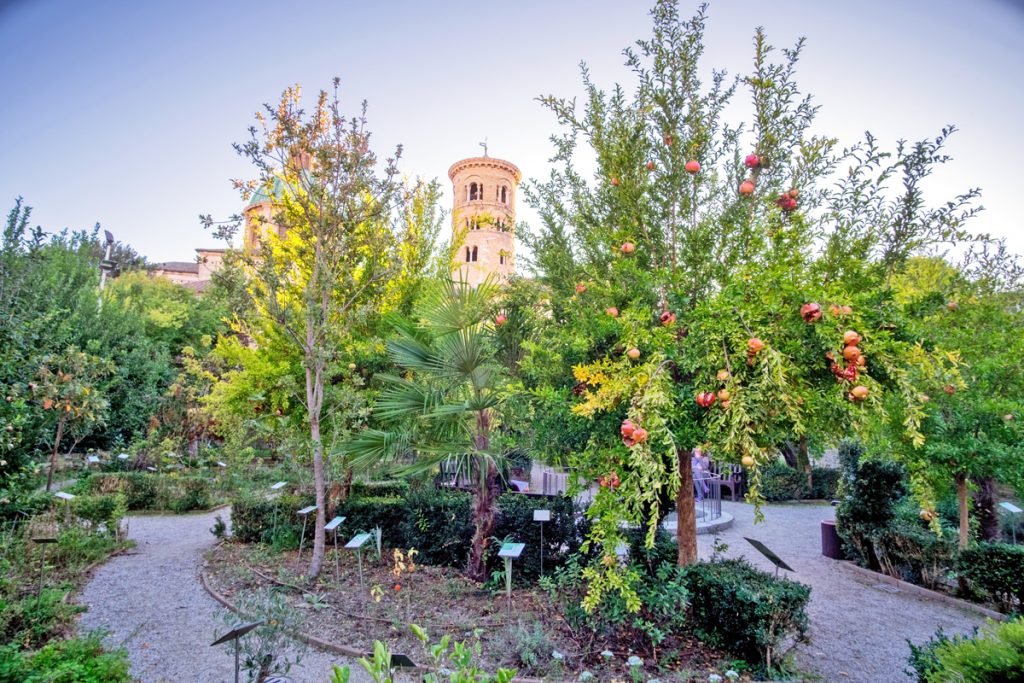 The garden, located in the historic centre between Via Rasponi and Via Guerrini, has existed since the fifteenth century and is surrounded by the palaces that belonged to the noble families of Ravenna, in the shadow of the dome of the Cathedral and behind the Battistero Neoniano (Neonian Baptistery).

Today, this patch of green is still a tiny haven of peace within the heart of the city, perfect for an aperitif or a lunch break.

Originally belonging to the Rasponi family and their palaces, in the second half of the eighteenth century the garden passed into the hands of Count Marco Fantuzzi and was then renovated and provided with an independent entrance, a monumental portal created by the architect Camillo Morigia in 1780.

Thanks to the initiative of the public administration and some private individuals, this charming corner has been successfully enhanced. The nineteenth-century layout, which still has a small wrought-iron fountain at its centre, has been preserved, and the beds of Mediterranean herbs and other lesser-known species, handed down in the apothecaries’ recipe books, have been philologically revived.

So, today it is possible to have tea among caper plants and holly bushes, or among the vegetables from our gardens, such as chicory and artichokes.

The atmosphere is very pleasant: with the surrounding walls to muffle the noise, it is an unusually tranquil setting, rich in colours and scents, with a spectacular view of the city.

Since 2020, the Rasponi Garden has also been home to a small open-air bistro. In addition to the all-day dining service with cold food, focaccia, stuffed pan brioche and cakes to be enjoyed seated at the tables, among the beds of aromatic herbs and in the shade of the flowering trees, the shop also offers shelf and counter products, such as preserves, dried pasta, wines, cheeses and regional cold cuts. For much of the year it also hosts cultural events, music and other public and private initiatives.

From Monday to Saturday: 9am – 7pm

The Garden and the nearby shop Ufficio Ubuntu connected to this green area, are open in compliance with the Covid-19 containment provisions.

Located in the city centre, bus stop 20m away (route 1), Pay and display car park in Guidarello Guidarelli car park, 100m away. Close to the Cathedral of Ravenna, to Archiepiscopal Museum, to the Chapel of Sant’Andrea and to Baptistery of Neon.