Home > myRavenna > Sea and Nature > Peacocks, doves, and Guinea fowls: the birds in the mosaics of Ravenna

Peacocks, doves, and Guinea fowls: the birds in the mosaics of Ravenna 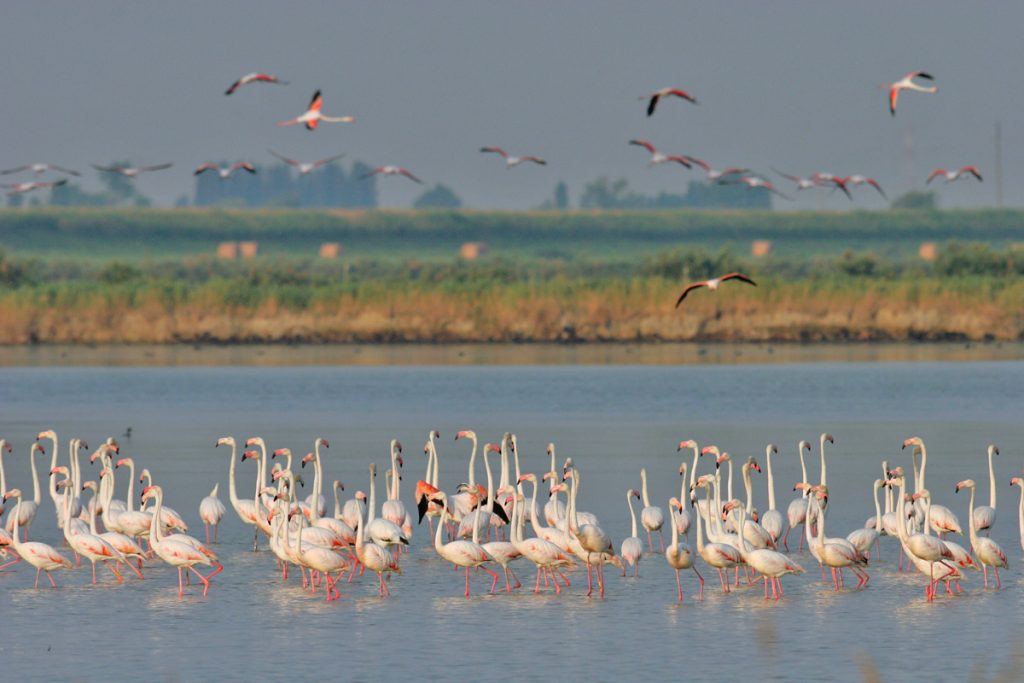 People often talk about Ravenna as a city of art, the ancient capital that still contains all the secrets of the Byzantine period within its gates and that has been able to astound poets, painters, and well-rounded artists…

But it is just seldomly remembered as a natural destination, even if the neighbouring valleys are full of breathtaking landscapes and offer the possibility to do many outdoor activities.

Among these, birdwatching is one that distinguishes this territory. Ravenna is a well-known destination for birdwatching enthusiasts, with more than 310 reported species, whose presence has inspired the mosaic decorations of the UNESCO World Heritage monuments!

In the mosaics of Ravenna it is possible to admire many depictions of birds, which are beautiful and rich with symbolism.

The birds of the Archiepiscopal Chapel (or St. Andrew Chapel)

The Archiepiscopal Chapel, the last Paleochristian chapel to be passed down to us in its entirety, is located within the Archiepiscopal Museum. It’s also known as St. Andrew Chapel because around halfway through the 6th century, the relics of the saint were transferred from Constantinople to Ravenna.

The cruciform chapel is preceded by a very interesting rectangular vestibule. The lower portion is completely covered in marble, while the upper part depicts hundreds of different birds, from the specimens present in the surrounding territories to exotic birds, interspersed with stylised white lilies.

Among the many birds, the presence of the 11 Guinea fowls and 8 starlings is important, as they are rarely represented. There is obviously no shortage of peacocks, pheasants (once considered to be admirable for their beauty) and herons.

The golden vault, adorned with these beautiful flowers and flamboyant birds seems to allude to heavenly joy and praise to the glory of Creation.

The drinking doves: from the Mausoleum of Galla Placidia to Invader

The most famous birds in the mosaics of Ravenna are the drinking doves depicted in the Mausoleum of Galla Placidia. They are certainly one of the most well-known symbols of Ravenna and one of the depictions that makes the greatest impression on those who visit the city.

Not by chance, an exceptional guest like the famous artist Invader has revisited them, re-proposing them in a street art variation. In this article we recounted how the street artist loves to “invade” the cities that he visits, creating a dialogue between his personal style and the symbols of the place.

The dove is present in other monuments such as the Basilica of San Vitale, in the Archiepiscopal Chapel and in the Basilica of Sant’Apollinare in Classe. The dove has always been a symbol of the Holy Spirit and if the dove is near a source of water  it may also represent the soul of the Christian thirsting for divine grace.

The enchanted forest in the apse of Sant’Apollinare in Classe

Sant’Apollinare in Classe, considered one of the most beautiful Paleochristian basilicas, strikes those who visit it due to its mosaic decoration in the apse, where the patron saint is at the center of a harmonious forrest populated by numerous plant species, a sacred flock and by numerous birds.

Many of these actors have a figurative value, such as the olive trees, symbols of peace, which touch the sky with their foliage. Others, such as the domestic pine, have a strong link to the territory of Ravenna due to the importance of the Pine forests of Classe and of San Vitale.

Among the vegetation, there are also many birds: there are doves, swamphens, collared parakeets, pheasants, and rock partridges, as well as others which are difficult to identify. The birds give color and dynamism to the scene, enriching the landscape and contributing to the charm of this sacred forest.

On the search for the peacocks of Ravenna: from the Basilica of San Vitale to the Classense Library

Perhaps less known than the dove but no less important, peacocks are truly quite prominent in the mosaic decorations of Ravenna. This beautiful animal in ancient pagan religions already represented immortality, as there was a legend that held that its flesh did not decompose after death. This symbology was also adopted by Christians, who adapted it to the concept of resurrection and eternal life.

At the base of one of the veils in the apse, where many animal and bird species are depicted, two specimens may be distinguished. To these can be added other four ones placed at the base of the floral garlands, where they are represented resting on blue orbs while fanning out their tails.

In addition to the gaudy ones on the ceiling, in the Basilica of San Vitale you can also admire peacocks on the mosaic flooring in the apse and on the slab that remains of the chapel dating back to the first half of the 5th century.

This blue bird can be found in other places of the city too, and to start the treasure hunt we’ll recommend other three ones to you. You may admire one at the Classense Library, in the mosaic room, where it is at the center of the a 6th century flooring; the entrance to Cappelleria Inglese in Via Raul Gardini 3 hosts one of these fascinating creatures in a contemporary mosaic work from 1998 by Cesare Vitali; finally, two peacocks are sculpted in one of the panels of the ivory chair of Bishop Maximian from the 6th century, the crown jewel of the Archiepiscopal Museum.