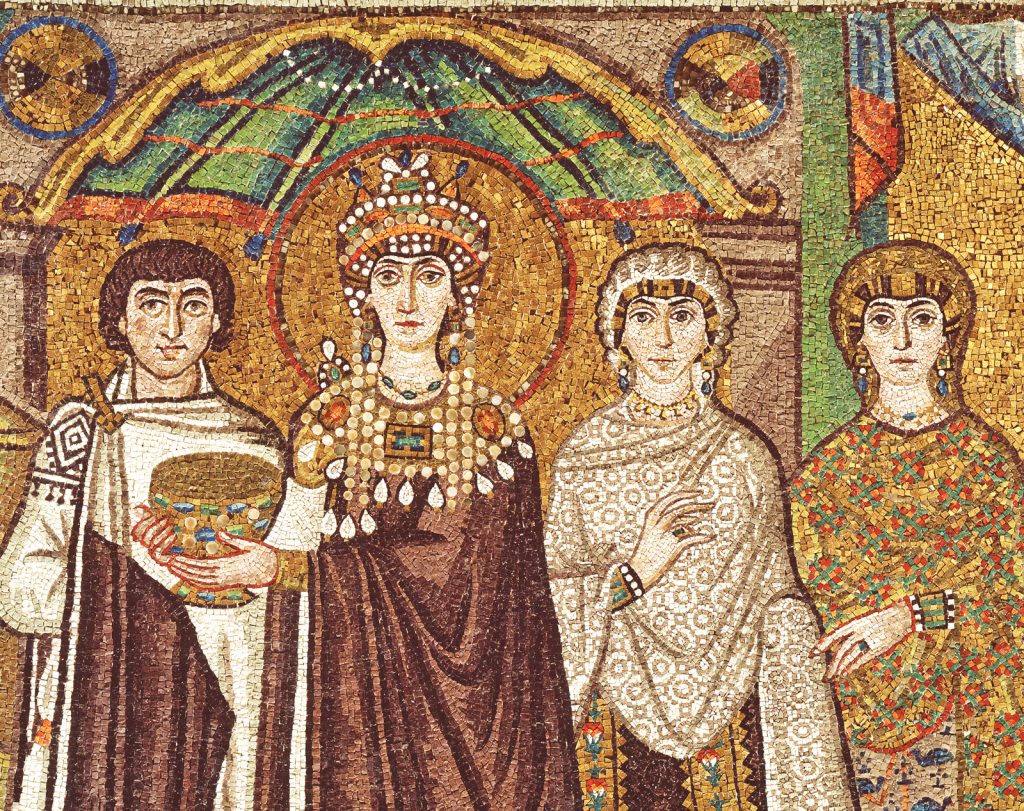 Among the many unmissable things to visit in Ravenna, the eight monuments which make up the city’s UNESCO World Heritage Site stand out.

My favourite one is the Basilica of San Vitale: imposing, towering, and majestic. Its mosaics have the ability to leave an indelible mark on our memory and in the memoirs of any tourist that, for one reason or another, visits the splendid capital of mosaic. Anyone who’s stopped in Ravenna can confirm this.

Several famous people support this idea. Did you know that Gustav Klimt drew inspiration from the image of Theodora for his Portrait of Adele Bloch-Bauer? And that even Dante Alighieri drew ideas from the mosaics of San Vitale for the composition of some of the verses in the Divine Comedy?

The basilica was built in the first half of the 6th century AD above an older chapel dedicated to San Vitale, which would be later absorbed by the basilica. Legend has it that it was in this very place that the saint was martyred, even if today we know that his body was recovered in Bologna.

Beyond the dome frescoed in the baroque style and the labyrinth depicted on the church floor, other aspects that make the interior of the basilica so breathtaking are the Byzantine mosaics adorning the apse. Among the countless details that make these mosaics unique are the famous representations of the procession of Theodora and Justinian, placed upon the lower part of the walls and facing each other.

Justinian (482-565 AD) was elected Emperor of the Eastern Roman Empire in 527, and remained in power until his death.

He is considered one of the greatest sovereigns of Late Antiquity, and is remembered above all for the Corpus iuris civilis, the foundation of civil law even today. Dante dedicated numerous tercets to him in the 6th Canto of Paradise.

In the mosaics of the basilica he is clothed in the Imperial purple and holds a golden basin, which he offers for the occasion of the consecration of the church. Notice that Justinian is depicted with a golden halo, even if he isn’t a saint: his figure was quite deified.

Around him it is possible to distinguish three religious figures preceding him on the left, amongst whom is Maximian, the bishop of Ravenna, whose name is written above his head.

On the right of the Emperor we can see the clothing of two court dignitaries. As regards the man between Justinian and the bishop, there are many hypotheses: it could be Julian Argentarius, financier of the Basilica’s construction, or praetorian prefect, a high-level Imperial official that resided in Ravenna.

In the background, the procession is followed by a group of fully armed honorary guards.

Facing the Procession of Justinian is the Procession of Empress Theodora. The lady is portrayed as offering a golden chalice studded with precious gems to the altar. The decoration above her head is ennobling: a diadem of stones and pearls graces her fair face, in strong contrast to the gold that surrounds it.

The decoration of the clothes of her court ladies gives an idea of the pomp, luxury, and splendour that characterized the court of Byzantium, and which is present even today in the gold of these mosaics. Behind them, the background decorated with tents, columns, and fountains reproduced their chambers.

On the Empress’ right, the procession is completed by the two court dignitaries preceding her.

The Processions of Theodora and Justinian in the mosaics of San Vitale are not only a prodigious example of Byzantine art, but furthermore offer a historical testimony about the aspect of Ravenna in the 6th century.

Visiting the Basilica of San Vitale means taking a trip back to the city’s Byzantine past.