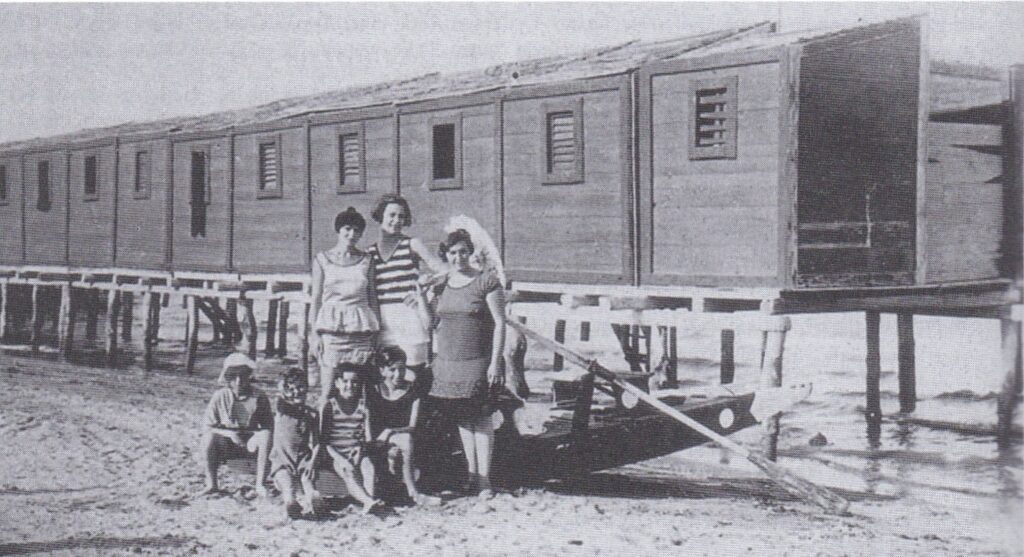 Up until 100 years ago beach life didn’t exist, summer was not a season for partying, and even less so was there a habit of going to vacation homes.

On the Ravennese coastline the first bathing establishments date back to the 1920’s.

The so-called vacation, offering full-board in-hotel service, is a fashion that began in the 30’s and one which, especially in this area, concerned only a small circle of elites.

Up until that point, the sea was a destination for a promenade every so often: one would go dressed to the nines and remained so even as they went for a swim.

In Ravenna, the designated day for a trip to the sea was August 10th, the day dedicated to Saint Lawrence. The tradition holds that a bath taken on that day would be equal to the beauty of 7 baths!

In this way, during the late 1900’s people would depart from the countryside, everyone aboard an ox-drawn wagon for a 15-km-long journey that lasted hours, from the hinterlands to the coast.

The trip, therefore, was experienced as a journey, rather than an excursion.

On the wide and empty beach of Porto Corsini, one would arrive early in the morning and with a full wagon, oxen included. If the wagon was conveniently able to provide shade for the noontime picnic, on the beach there was space for all: even the animals were given free reign to refresh their hooves amongst the bathers and the splashing, hollering and tumbling of the children.

With the passing of time, the wagons were replaced by bicycles and the most fortunate ones, in good weather, managed to make a round-trip to the sea and back with the wind on their backs.

At that time, the handlebars of bikes were laden with heavy bags. In one side of the bag was a big bottle of wine, and on the other side was bread, salami, and the non negotiable ciambella romagnola (a type of sweet dessert bread.)

The first news of the first bathing establishment dates back to 1870, when Società Balnearia (lit. Bathing Society) planned to open a “beach for the people of Ravenna”, agreeing upon a group of boats that would have ensured a regular service from the city to its sea.

In this image, it is possible to see the layout of small wooden cabins, constructed over a boardwalk above the sea, south of the Candiano canal.

The establishment of the first Travel and Tourism Agency of Ravenna  (AKA Astra) on the other hand occurred in 1926.

The outbreak of World War I dampened enthusiasm and the the first hotels were born only in the 1930’s.

And so it was that in 1930 the Grand Albergo Pineta was constructed in the Liberty style along the coast, in what is today the territory of Marina di Ravenna.

It is said that back then there was a tourism cooperation with Prague and that the first vacation groups came from there.

We know that Nobel Prize winner Eugenio Montale came to spend some time in this area and that his recollection of the place remains vivid in his poem “Dora Markus”, later added to the collection “Occasioni” (lit. Occasions).

For the most part, the beaches of Ravenna were frequented by local tourists – from Ravenna, Bologna, Modena – and ordinary people.

After World War II, the tourism sector recovered and the new bathing establishments became ever more densely conglomerated. Despite this, people took up the habit of going for a stroll “to see the stores” as far as Milano Marittima.

Who could afford to, however, built a villa at the sea, a second home in which to spend the weekend; here, in the 30’s, the Ottolenghi family had already built a large villa that later, when Antisemitism began to flare up in Italy, was sold to the famous tenor Giuseppe Di Stefano.

Passed down from one person to another, today it hosts the most luxurious hotel of Marina di Ravenna, the Park Hotel which preserved the portico and main body of the original building’s structure.

The Grand Albergo Pineta, with its 44 rooms, and only hundreds of meters away, suffered a different fate: after only 14 years of activity, in 1944 it was occupied and then blown up by the Germans in order to make space for their anti-air batteries.

In fact, the only building that has survived from that era is Colonia Marina dell’Opera Nazionale Balilla (Seaside hostel of the Italian Fascist youth organisation), which was inaugurated in 1934.

The “LIDO” and the “ADRIATICO” were built respectively in 1938 and 1939 and were designed to be the first modern bathing establishments in the area.

Shade was offered to bathers by large colourful curtains and the first comfort packages were offered in the form of seasonal passes which offered access to wooden sheds in which to change into bathing suits or to take an afternoon nap.

There are still several perfect examples of these structures that have survived until today on the free-access beaches and they offer us precious heritage from that era.

From July 6th to July 9th 1944, Marina di Ravenna was struck by aerial bombardments which destroyed the lighthouse, the aqueduct tower, the church, and several other houses in the area, along with the pier and nearby petrol extraction plants.

On the beach people played football, but an up and coming game – spread by the American Marine Corps based in Porto Corsini during 1918 – was volleyball.

During this period likewise, daily outings started becoming more popular and in the evening there would be great fish feasts, as recounted in the Sonetti Romagnoli (lit. Romagna Sonnets) by Olindo Guerrini.

After the war, the city dock began to offer a commuting service by using the vaporetto (speedboat) that in an hour delivered its passengers from the present Darsena area to Marina di Ravenna.

Shortly afterwards the first bus route was introduced and lucky car owners were able to rely upon the connection provided by the Statale 38 Romea highway: this was the moment when the sea really boomed in popularity.

This is the moment when the “beach vacations” as we know them today were born.