The story of the columns in Piazza del Popolo in Ravenna 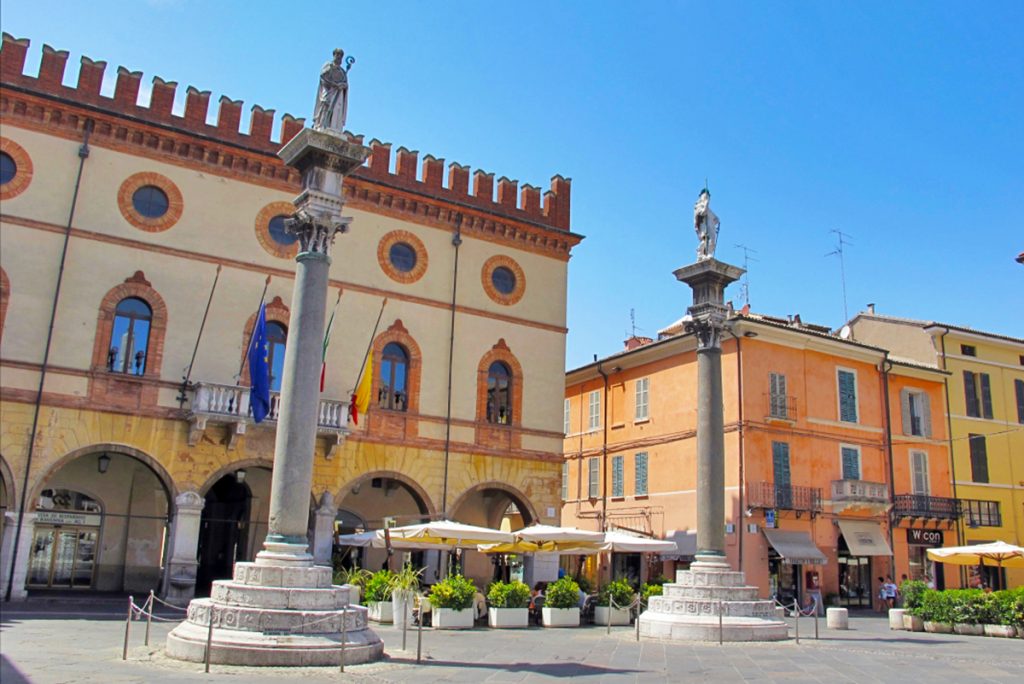 The columns in the main piazza of Ravenna have great historical relevance that regards various events that took place in the city, particularly during the Venetian era.

Once there was water in Piazza del Popolo. There was a small river, Padenna, which crossed the city from north to south. Then the Venetians arrived around 1441 and decided to cover it, widening the piazza and, shortly afterwards raised two columns which are very similar to those found in Piazza San Marco, a small distance from the famous Lagoon.

Characteristic of the centre of Ravenna, these two architectural elements hide a series of secrets and curiosities.

When they were erected in 1483 to mark the Piazza towards the flow of the Padenna, the Lion of St. Mark was placed on top of one of them while on the other was placed a statue of the patron saint St. Apollinaris.

From 1509, the year in which the Pontiff Julian II took possession of the city after defeating the Venetians, the insignia of the Serenissima disappeared: the lion was substituted by the Patron Saint and a statue of San Vitale appeared at his side.

By carefully observing the Column of San Vitale, we can note that there is a sundial on its surface, which was created by the Venetians and later engraved in 1783. This watch served to indicate solar noon in Ravenna with the Italian hour system in use at the time, and was also used to regulate the piazza’s mechanical public clock – which was built the first time by the Da Polenta family.

After a restoration promoted in 1868, the sundial remained an object of controversy in public opinion due to its alleged inaccuracy, especially near solstices and equinoxes.

At this point the Ophiucus, also called the Serpentario, came into play. But what is it?

Ophiuchus may be the 13th character of the Zodiac but in fact it is the only constellation crossed by the ecliptic that hasn’t given its name to a zodiac sign. Mentioned since the times of Ptolemy, it depicts a powerful man fighting off an enormous snake.

In one of the two bases of the columns, both created by Pietro Lombardo (the father of Tullio, creator of the Guidarello statue), we can find a cycle of bas-reliefs with the twelve zodiac signs, and an element depicting Ophiuchus.

Under the inscription which confirms the authorship of the bases “Opus Petri Lombardi 1483”, it is also possible to see Ercole Orario, known to the Ravennese as Conchincollo. It is essentially a miniature of a larger statue of Hercules, which the Emperor Claudius had erected and which toponymic tradition held to be located in the heart of the city.

The demigod held up a quadrant in the form of a hemisphere (almost like a shell), above which there was a stylus from which the hour lines began. It was an enormous sundial which told the time for the citizens of Ravenna until it collapsed in 1591 due to an earthquake.

Some fragments were used for the base of the column which is now located in Piazza dell’Aquila. A foot is conserved at the Ravenna National Museum.

The flavour of a land, of a city, of a people, is often found in the details, in the centimetres, in the portions of art and beauty, which perhaps surprises us precisely where we do not expect it.