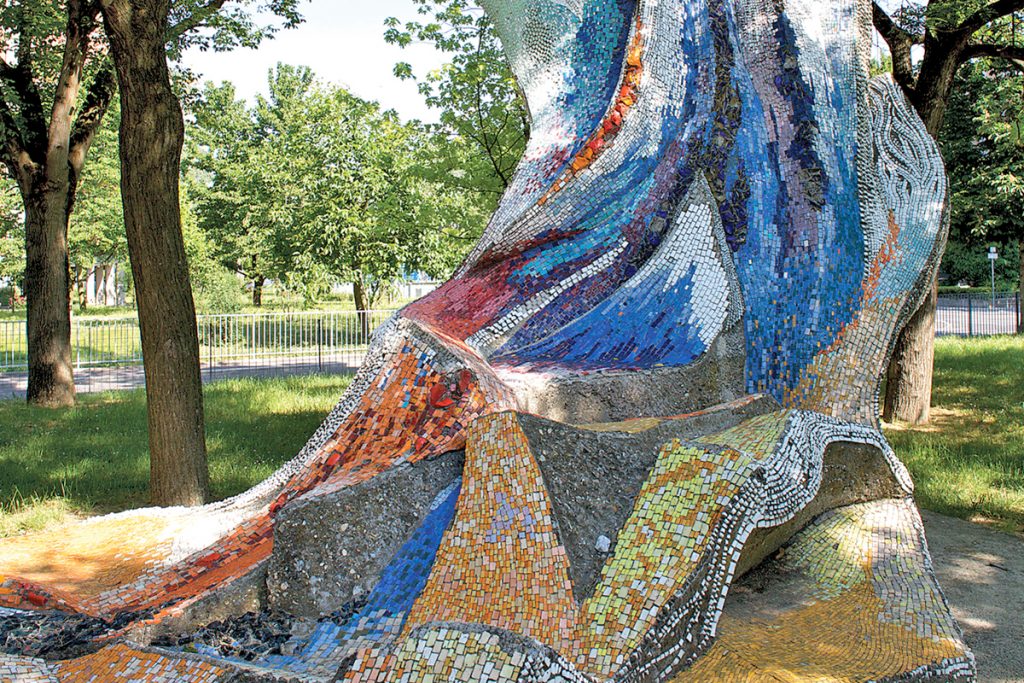 Conceived in 1980 by the Belgian mosaicist and sculptor Claude Rahir, together with Isotta Fiorentini Roncuzzi, the Park of Peace was built in 1988, according to a design by architect Sergio Bianchini, with the advice of Mario Manieri Elia.

Located on the outskirts of Ravenna, in the Stadio area, the park now houses works by contemporary mosaicists and is a true open-air museum.

The common denominator of the sculptures placed here is the theme of peace and friendship between peoples, represented by the various Italian and foreign artists using different techniques and materials to give voice to a universal message.

An international commission chaired by the great art historian Giulio Carlo Argan and made up of Palma Bucarelli, Mario Manieri Elia, Achille Bonito Oliva and Pierre Restany, selected the artists who would contribute to the creation of the Park of Peace. Some of the most representative artists of the time were chosen, such as Mimmo Paladino, Bruno Saetti and Emilio Vedova, who prepared the pictorial sketches, which were then interpreted by the mosaicists.

Only Paladino’s cartoon, however, was executed by the Ravenna schools. Vedova’s cartoon, on the other hand, is kept at the MAR and, due to Bruno Saetti’s sudden death, his heirs decided to donate a pre-existing mosaic to the city.

In addition to these masterpieces, the garden boasts works by the Belgian Claude Rahir (Sign of Peace and Friendship), the New Zealander Margarett L. Coupe (A Pacific Free of Atomic Bombs), the American Jerry W. Carter (The Second Genesis), the Muscovite Alexander Kornooukhov (Man and Nature), the French Josette Deru (The Tree of Life) and the Viennese Edda Mally (The Wings of Peace).

Finally, in 1990, Akomena Spazio Mosaico enriched the park with one of its untitled works, taken from a stamp designed by the Academy of Fine Arts of Ravenna, printed by the State Mint in 4 million copies.

Every day: from 7.30am to one hour before sunset

Admission to the park is subject to the strict respect of the prohibition of gatherings as well as the 1 m safety distance from each other. The kids play areas are closed.

The park is situated near Viale Randi, a few kilometers away from the city centre. Car park and bus parking along the street; bus route n.3 (bus stop in Via Cassino). Close to the hospital and to the stadium.