Flowers and plants in the mosaics of Ravenna 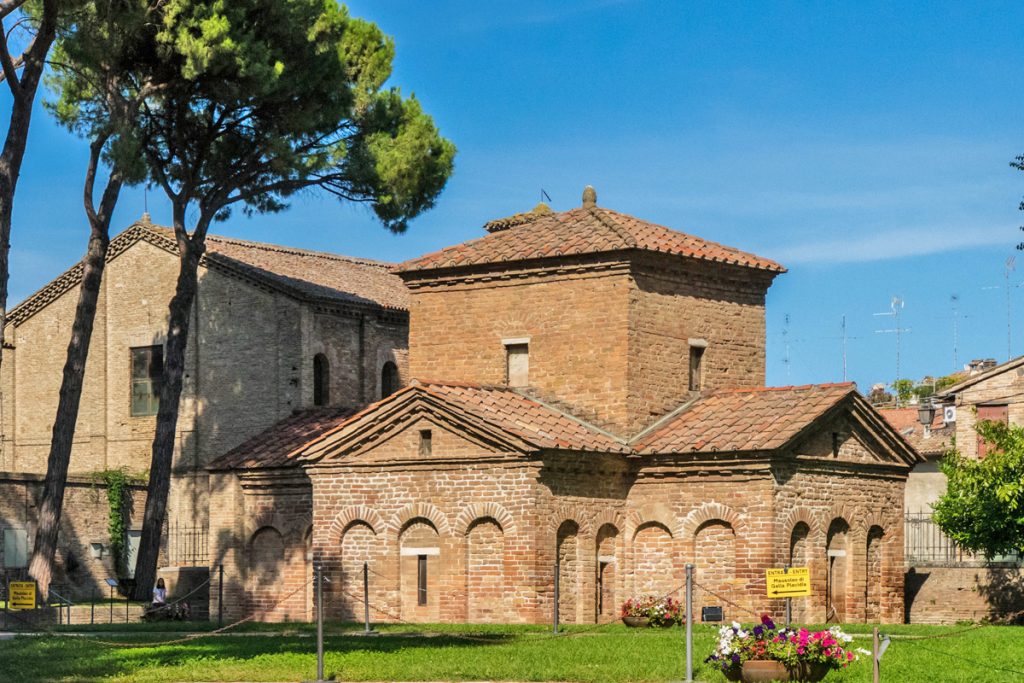 The city of Ravenna, queen of the golden age of Late Antiquity, preserves admirable artistic and architectural testimonies within its eight UNESCO World Heritage monuments.

Within these monuments it is possible to admire works of sacred history, derived from the Old and New Testaments, and of political history connected to their architectural affairs, that have a rich and colorful naturalistic landscape as their background.

In this way it’s possible to distinguish images of flowers and plants, the floral macrocosm that parallels the human-divine macrocosm, created by the profusion of colors and shades typical of mosaic art.
The artists of the Christian era represented nature not as a simple complement to the image, but to express profound Christological concepts.

Starting from the Mausoleum of Galla Placidia, the precious chapel of the Church of Santa Croce, we find daisies and anemones woven onto an indigo-blue background.
The daisy, a composite plant typical of arboreal environments, has a short stem with large leaves placed at the top; the flower grows with its peduncle on the yellow inside where pollination occurs and with white petals on the outside.

Due to its leaves rich in mineral salts, for the Romans this plant performed a healing function for wounds; hence symbolizing the Christian meaning of rebirth.

Anemones belong to the family of perennial weeds and dot the woods with their leaves; the flowers, on the other hand, are formed by an external envelope with colored petals, rendered in the form of a cross in the mosaics. This flower, from the Latin anemos (“vital breath”), indicates the transience of earthly life, and for its fragility is connected to clouds; furthermore they are considered very bitter and poisonous due to the classical myth about the death of Adonis (loved by Venus), from whose blood anemones are supposed to have been born.

The Neonian Baptistery is the oldest and best preserved baptismal building in ancient Christianity. The procession of the apostles is represented in the decorative band of the dome, separated by elaborate candelabras composed of thistles, a wild herbaceous plant with thorny leaves associated with the Passion of Christ.

It is a very resistant plant that if stripped out grows back, and is therefore a symbol of eternity. In the Mediterranean variety there is the milk thistle (in Italian the marian thistle). According to legend, on her journey to Egypt, Mary stopped in a field of thistles to breastfeed Jesus and here her milk flowed forth, hence its thaumaturgical function, later confirmed by modern medicine.

In the Basilica of Sant’Apollinare Nuovo, in which different artistic currents and religious confessions merge, white lilies and rock roses appear in figurative representation, which are also present by the way in the Heavenly Garden on the apse of the Basilica of San Vitale.

Lilies belong to the liliaceae family, and are typical of sandy-dune environments. The Pancratium maritimum variety is represented in the mosaics. Its flowers grow from its stem in multiples of three. Christian tradition connects it to the young Pancras, who in the days of Diocletian suffered martyrdom in Rome while he was meeting with his followers: he was condemned and beheaded, and his body was violated. From this event the flower was associated with the boy’s violated purity.

The rock rose is a branched shrub typical of Mediterranean scrub, and is widespread in dune and sand-covered environments. It has flowers with red petals rimmed with yellow. In the East, incense was created from them to produce a perfume very similar to that of amber. From an iconographic point of view, they represent the blood shed by the martyrs in the Christian era.

Next to the plants with flowers, the Ravenna mosaics illustrate the trees in the sacred and disappeared woods of the Basilica of Sant’Apollinare in Classe. Olive trees, domestic pines, junipers, holm oaks and palm trees are represented in the basin in the apse behind Apollinaris, the first bishop of the city.

Olive trees – with their twisted trunks with lanceolate leaves, evergreen and with sparse foliage, are the age-old trees of the Mediterranean world, resistant to violence from both men and atmospheric agents. Because of their inexhaustible vitality, an element created from the union between earth and sky, they are seen as a symbol of peace.

The stone pine is an evergreen plant with an erect trunk and an umbrella-like canopy. It has a cracked bark and the leaves are needle-like, although not sharp, and its seeds are edible.
It grows in coastal environments. It is therefore no coincidence that it is found in the ancient pine forests of Ravenna, planted by the Romans who used it in construction and naval fields, but also as a fuel. Its resin is used to make wax, or dried to produce black pitch. Its seeds and propensity for reproduction are symbols for the fruitfulness of the Word of God, while the plant, due to its inexhaustible wealth, is linked to eternal life.

Juniper is a wild evergreen shrub found in the Ravenna pine forest. It has a sharp oval shape with green and streaked needle-like leaves, and its flowers are carried on separate plants. Its blue berries can be grounded to obtain liqueurs and beverages for therapeutic purposes, but can also quench thirst and combat bad breath. The value of eternity is also attributed to this plant.

The holm oak has dense foliage with hardy dark green leaves. It lives in the limestone soils of the Mediterranean area. In the Bible it is seen as a sacred tree and a symbol of religious authority.

The date palm, typical of the arid environments of the Mediterranean region, has a slender trunk with pinnate and almost leathery leaves, and it flowers in clusters. The foliage can reach ten metres in height. In the Christian tradition, it is considered the reward for those who have lived in service of others, the righteous, and is therefore associated with the martyrs who offered their lives to promote the Word of Christ.

In the Basilica of San Vitale, the arboreal protagonist of Abraham’s story is the walnut tree, which the three angels who came to announce Sarah’s motherhood rest under.

The walnut tree has been cultivated by man since ancient times. It is of a considerable size and has great longevity, which is why it is considered the king of fruit trees. Its significance is linked to the Trinity because it unites three elements: the hull, the shell and the kernel, that is, the Father, the Son and the Holy Spirit.

These plants and flower specimens, which have been immortalized in the precious mosaics of Ravenna, are pieces of an ecosystem in symbiosis with the man of the past, a past which modern man should return to having as a key element of life.