CAPPELLETTI is a traditional dish typical of Romagna.

This particular kind of egg pasta gets cut into squares and filled with cheese. Once, the preferable cheese was Formaggio di Fossa, while today the most used ones are Parmigiano Reggiano or Grana Padano and, if desired, some Squacquerone.

They are folded as little hats and are similar to Tortellini, but bigger.

In Romagna, Cappelletti are cooked as a typical Christmas dish, but they are eaten all year round with capon broth, meat or fish sauces.

Even though Pellegrino Artusi‘s recipe published in his “La scienza in cucina e l’arte di mangiar bene” (Science in the kitchen and the art of eating well), states that traditional Cappelletti in Romagna are filled with ricotta, capon chest or pork loin and cooked in capon broth, the most ancient tradition in the area of Forlì is to fill them with a meat-free filling. 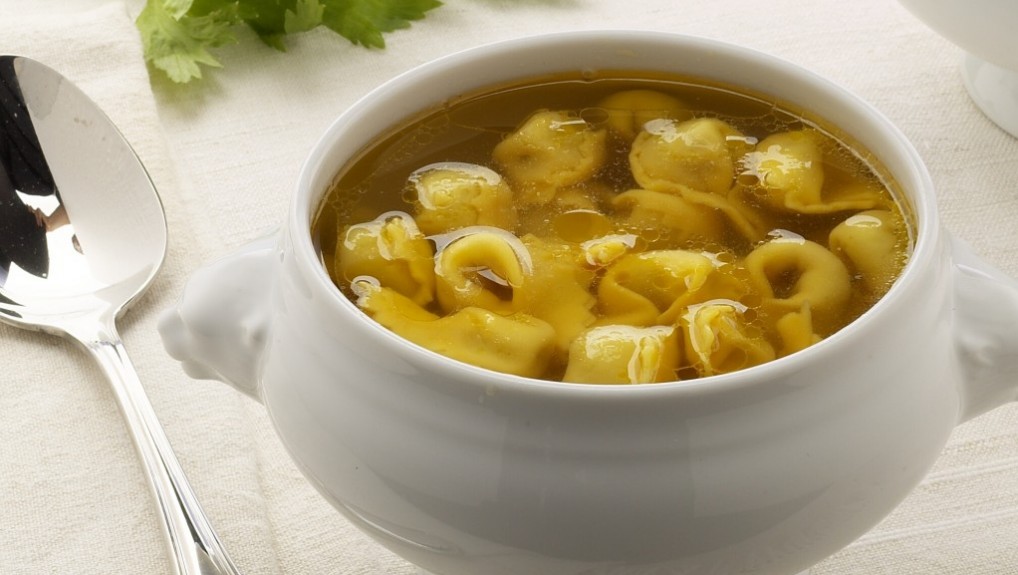 Pour the flour in a large bowl and add the slightly-beaten eggs. Mix flour and eggs well by pushing with your fingertips.

Once you get a smooth and uniform dough ball, leave it to rest at room temperature for 30 minutes. In the meantime you can prepare the filling. Mix cheese, a bit of nutmeg, pepper and one egg.

After half an hour take your dough and feed it through the pasta machine or roll it with a rolling pin on a slightly floured surface. Cut out squares on which to place the filling.

In order to get the real shape of Cappelletti, fold the square into a triangle and seal it on the sides to hold the filling. Draw the bottom two corners together to form a ring and pull the sides (as a hat brim).

The size and thickness of the Cappelletti depends on your taste, but do not exaggerate with the filling, because otherwise they will break.

If you want to eat your Cappelletti with a sauce, cook them in salted water and drain them as soon as they get to the surface. Then season them with your sauce.

If you want to eat them in broth, you must cook them directly in it and serve them hot as soon as they get to the surface.

A proper Cappelletti portion is made up of 18/20 pieces. Maybe some more, but never some less!

Egg pasta and broth. For the avoidance of doubt, those are the only two elements common to these two famous kinds of filled pasta. Cappelletti, mainly popular in Romagna and in the Northern part of the Marche region, and tortellini, undisputed lords in the area of Bologna and Modena, are cousins but not brothers.

Some 16th-century documents witness that. They describe stands selling Tortellin in Piazza Maggiore in Bologna and Cappelletti being cooked at the court of Alfonso I d’Este. Their filling and shape are different. The only thing they have in common is that they are a kind of filled pasta usually prepared in the festive season.

Even though at the court of Ferrara Cappelletti were filled with meat, in Romagna today the filling is made with cheese, while the traditional Tortellini feature a meat filling.

In 1974, the Dotta Confraternita del Tortellino (Brotherhood of the Tortellino) registered the official recipe with the Bologna Chamber of Commerce. The recipe states that the filling must be made with pork loin, cured ham, mortadella, Parmesan, eggs and nutmeg.

The filling of the Cappelletti must instead be made with ricotta and other soft cheese (as caciotta, raviggiolo or squacquerone), grated Parmesan, nutmeg, raw eggs and, in some areas, lemon rind.

Finally, Tortellini are smaller. Cappelletti are bigger and softer, with a thicker dough-sheet and more filling. Did you get hungry?