The Story of Gugù, the Rasponi with a big heart 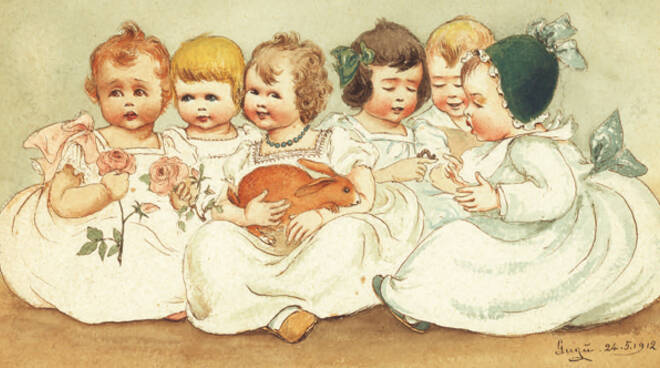 Walking through Ravenna, it’s easy to find the name Rasponi. There are many buildings and palaces that are, or were, called by that name, like the beautiful Rasponi crypt, a destination much beloved by visitors.

The Rasponi family was for many centuries one of the richest and most influential family in Ravenna. Even if many members of this family are remembered for having stained themselves with evil acts, crimes and offences, today we would like to talk about a truly virtuous person from this family: Gugù Rasponi.

Augusta Rasponi del Sale was born on November 16, 1864 in Ravenna. She studied Classics, French and English, which she knew well, so much so that as an adult she even translated Rudyard Kipling. She had many talents, but one passion stood out among them all: drawing.

Augusta began to draw from a very young age, and always signed her name as Gugù, her pseudonym that she never abandoned throughout her career as an illustrator. The subjects that she portrayed are always children, to whom she dedicated her entire life.

At the children’s side there is often a silly goose, a sort of alter ego, which plays together with them. With a brush she materialised her greatest dream: the desire that every child could be healthy and happy.

Gugù Rasponi: A life dedicated to the happiness of children

Gugù’s love for children was born of her attitudes as a philanthropist. “La mia statistica, piccolo studio sull’allevamento dei bambini” (lit. My statistic, a small study on the upbringing of children) from 1914, for example, is a manual to instruct parents on how to raise healthy children, describing some good practices to adopt.

She dedicated herself to children in economically-challenging situations, to children with health problems, or without parents for her entire life. After the earthquake in Messina in 1908 she offered her support to the orphan children, and during World War I offered her aid to care for the sick.

Upon the death of her parents she sold everything to donate it to charity and left the large palace in Piazza del Popolo to go to live in a more modest residence.

Augusta Rasponi, called Gugù, is one of the people from Ravenna that has made our city great. A street near the historic center and a Pre-School are dedicated to her, so that her example of goodness will never be forgotten.