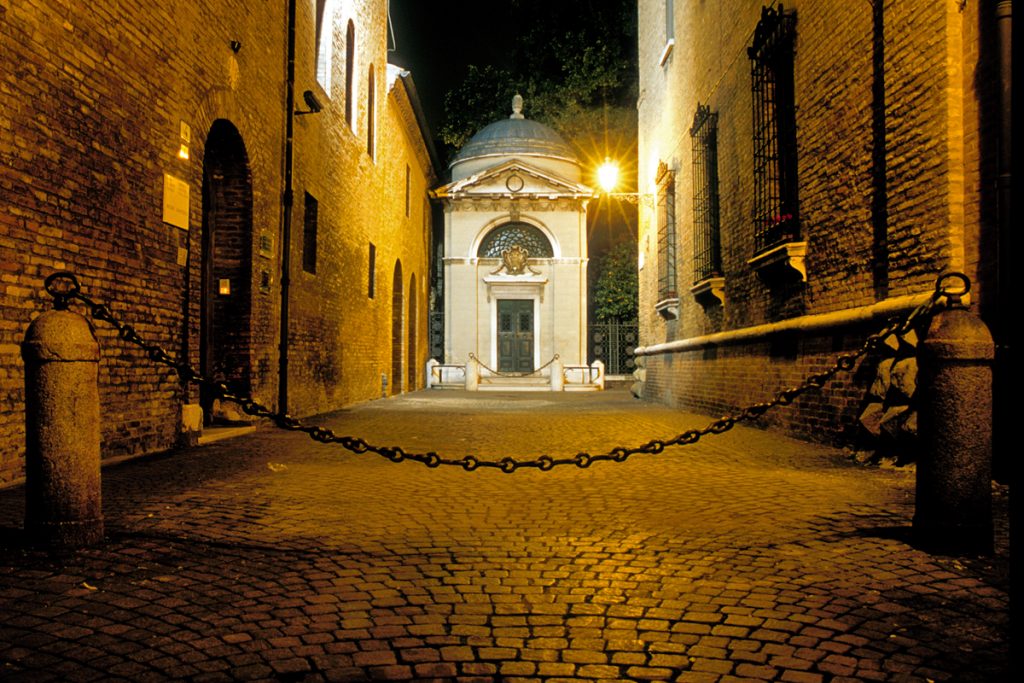 Every city has shadows that are reflected in the wrinkles of its history. Events that, despite being minor affairs, have represented crucial moments in the human events of society.

Just as in the best pages of a noir novel, Ravenna too is not exempt from all this. A city of emperors, anti-popes, brigands, nobles, anarchists, warriors and martyrs, the former Byzantine capital has been marked over the course of time by bloodshed and mysteries that reveal interesting stories to learn about, stories of crimes, revenge and skillful deception.

Apollinaris, the martyrdom of the first bishop

The patron saint of Ravenna is Saint Apollinaris, who is believed to be the founder of the Church in Ravenna. It seems that Apollinaris preached with success and converted many pagans of the city, attracting the ire of the Roman pagans. He was told to sacrifice to the old gods, but he refused and for this he was beaten and nearly died.

Nursed back to health by a widow, he recovered after a few months and resumed his evangelizing mission. He was beaten again and exiled, but never left the city as a storm prevented his ship from leaving the coast. Threatened once more, Apollinaris yet again refused the pagan cult, and was again beaten and finally died of his injuries. The dating of these events is uncertain (either July 23, 74 AD or at the end of the 2nd century AD).

On the death of Emperor Theodosius (395 AD), the Western Roman Empire with Ravenna as its capital was left to his son, Honorius. The tutor entrusted to him by his father was a man named Stilicho, a general of proven loyalty. But the presence of the commander proved unpopular with the Roman superiors, who feared the strength of his barbarian troops: whoever can control the barbarians could tomorrow incite them against the empire and proclaim himself emperor.

The opportunity arose during an uprising of the auxiliary troops. Stilicho attempted to mediate the revolt, but Olympius accused Stilicho himself of being the instigator of the protest.

Stilicho fled to the cathedral, invoking his right of asylum, but once he was captured he was condemned for treason and beheaded by Olympius’ guards, probably in the square in front of where the Cathedral of Ravenna stands today.

A story worthy of Shakespeare is that of Theodoric and Odoacer at the end of the 5th century AD. The former is the king of the Ostrogoths, a man educated at the Byzantine court, which was gaining more and more power in Eastern Europe.

Formally his ally, the Byzantine Emperor Zeno, worried by his increasing power, decided to send him to Ravenna to oppose Odoacer, the illegitimate King of Italy who had by then reigned for about fifteen years, for having deposed the last Western Roman Emperor, the young Romulus Augustulus.

After a three-year siege, Ravenna surrendered, and thanks to the intervention of Bishop Giovanni, the two sovereigns decided to divide the kingdom in half. Invited to a banquet by Theodoric at the Imperial Palace of Laureto (which stood at the current Via di Roma near Via Alberoni), Odoacer presented himself in peace.

But the Gothic king awaited him in the palace, ready to assassinate him with his own hands.

Da Polenta, crimes within the walls

The protagonist of this event is Ostasio I Da Polenta. He is the cousin of Guido II Novello, the head of the Da Polenta family and the man who would host Dante Alighieri in the city during his exile. Guido was a generous host, but he turned out to be a poor leader and, while he was in Bologna, Ostasio usurped his role, having Archbishop Rinaldo, his cousin and the brother of Guido Novello, killed. In this way, Guido became an exile in Bologna, and due to his absence of allies in Ravenna, he could not return to Ravenna for fear of his life.

But Ostasio was not satisfied with this state of affairs and devised another cruel plan. He allowed an escaped person to return to Cervia on the condition that he would incite a revolt. During the riots, his uncle Bannino and cousin Guido, the town regents, took refuge in Cervia. Ostasio waited for them there to kill them and take control of the territory of Cervia as well.

Ostasio’s son will have his own brothers Pandolfo and Lamberto die in prison. The same fate would later befall his own son Guido the Last, at the hands of his sons, one of whom, Obizzo, will be responsible for the cession of the Signoria of Ravenna to the Venetians in the mid-15th century.

Guidarello Guidarelli, death and then a kiss

Born in Venetian-controlled Ravenna to a Florentine family, the firstborn of the Guidarelli family was a captain of the Holy Roman Empire, and therefore, by the favour of the Pope, among the ranks of Cesare Borgia.

He also fought for the Serenissima and will always remain linked to Venice, probably serving as an informant as well.

This double game did not please Cesare Borgia who, during one of his masked balls, would have him assassinated. A more accurate reconstruction, in the light of some documents examined around the 1930s, proposes instead that his death occurred from the injuries incurred during an armed dispute, which arose due to the failure to return a garment loaned for a party.

What is certain is that Guidarello, at the end of his life, was able to leave instructions so that his body would be buried in Ravenna, where it still rests today under his famous likeness.

The massacre of the French

Gaston de Foix is ​​the nephew of the king of France and commander of the French army, engaged in Italy in 1512 alongside the Este, against the Pope, the Venetians and the Spaniards.

In the battle of Ravenna he prevailed on the Spaniards who were forced to retreat, although they did not suffer defeat.

Gaston, however, was not satisfied by this victory. He launched himself in pursuit of the enemy, trying to hit him from behind. Surrounded by a troop of cavalry near the Ronco river, he was isolated and received a fatal blow. A memorial still stands today near the area of the ambush which commemorates his death and that of many other soldiers, perhaps twenty thousand, macabre protagonists of a true massacre.

At that point the French will evade truce and the surrender agreements, breaking into the city to sack it. Twenty-four Gascons, guilty of having violated a convent of nuns, were hanged from the gates on the orders of the famous general Jacques de La Palice.

Even Giovanni Pascoli sang the praises of Stefano Pelloni, known as Il Passatore, and about his exploits, with a fair dose of romanticism and magnanimity. But the Romagna bandit, although at times capable of gallant and generous gestures, had very little courtesy. With his band he bloodied his hands with numerous murders, bloody robberies, dismemberments and executions.

For this reason, after he was hunted down and killed in March 1851, his body was exposed in the squares of Romagna, both as a trophy and a warning.