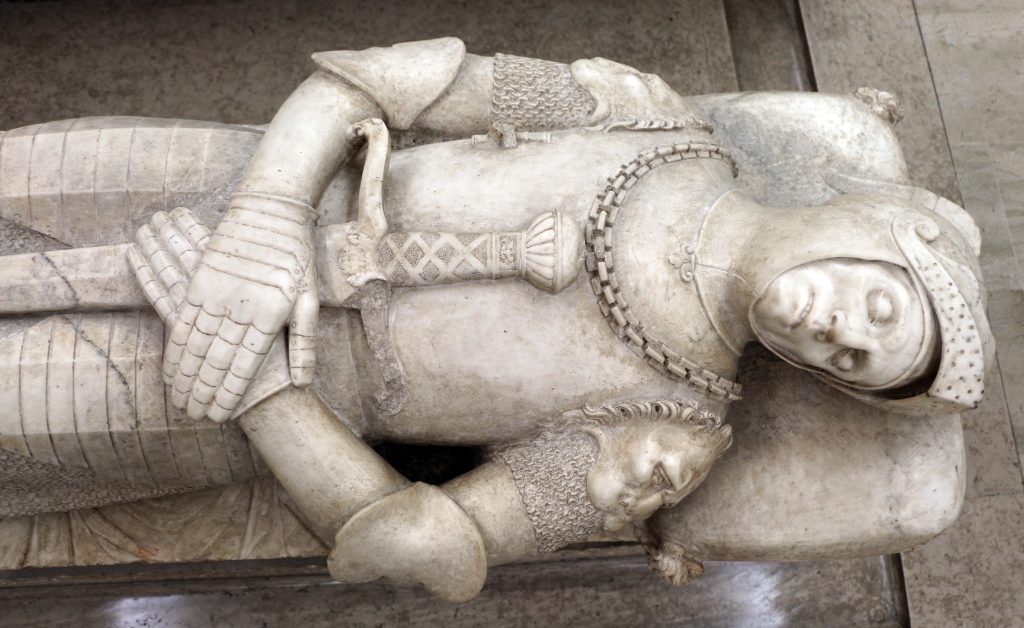 Some time ago I visited Ravenna with my mother, who hadn’t been to the city for a few years. She remembered an art gallery where she had seen a statue of a soldier who had impressed her a lot. I could hardly believe the coincidence: “Oh, you’re talking about Guidarello Guidarelli!”

I had been hearing about it for some time, as it was an object of one of the sections of the MAR – Ravenna Art Museum.

Of the many works exhibited in the museum, it was perhaps the one I longed to see most. The aura around Guidarello Guidarelli’s tombstone is perceivable even before the sculpture is seen.

The fascination begins when we discover the existence of a legend regarding him: if a girl kisses the warrior’s lips, she will get married within the year and, if she has already been married, she will have a child within twelve months.

Beyond the legend, which created a true myth surrounding his white effigy, Guidarello piques many people’s curiosity due to the other mysteries concerning him as well.

The first of such mysteries is linked to the authorship of the statue, which has given rise to many debates, while the second one regards the story of his life, or rather, of his death.

So who was Guidarello Guidarelli then?

Born in Ravenna around the middle of the 15th century, he was named as a knight of the Holy Roman Empire in 1468 while still very young.

In his days, Ravenna was under Venetian influence, and therefore he fought several times in the ranks of the Serenissima, for which he was also an informant. Later, he fought for Pope Alexander VI as well and finally he would fight for his illegitimate son, Cesare Borgia.

It was during one of these campaigns in 1501 that Guidarello was in Imola, during the period of Carnevale, when he met his demise.

For a long time the cause of his death remained unknown, and several legends were created.

One can read, for example, that perhaps he was beheaded by Borgia due to his role as an informant for the Venetian Republic, or that he died because of a duel that had broken out because of love. The latter scenario today seems unlikely: perhaps it was spread to fuel this romantic myth.

The most credible version today however is no less fascinating than the others. According to a fragment found in 1930 in a chronicle from the time, it seems that the warrior had lent a shirt adorned with gold to a certain Virgilio Romano for the occasion of a masked ball and that the latter, not wanting to return it, killed him. The Duke then avenged the unjust murder of Guidarello and had Virgilio Romano killed.

During a long agony, Guidarello managed to give instructions to his wife for his funeral rite, asking a sort of commission composed of six humanists to decide how to invest 600 ducats for the construction of his tomb.

The most credible sculptor of his funeral slab is Tullio Lombardo, who was also the creator of the slab depicting Dante in the monument dedicated to him. In 1525 he was paid 350 ducats for the restoration of the chapel of San Liberio in the Basilica of San Francesco, where the tomb was located until the mid 17th century.

Besides Tullio Lombardo, other names had been proposed in the past, such as Giacomello Baldini or of his father Pietro Lombardo, who were already active in Ravenna (for example, the bases of the columns in Piazza del Popolo are their work).

We will probably have to content ourselves with remaining uncertain as to the authorship of the slab. Moreover, perhaps it was not just one “master” who freed Guidarello from his marble, because often all the members of an artist’s workshop would contribute to the creation of a sculpture.

As if the mystery surrounding the creator of the plate weren’t enough, in the 90’s two art historians proposed the hypothesis that the Guidarello sculpture may not be the original, but a copy from the Romantic era.

Supporting this hypothesis is the fact that the work underwent numerous movements: some argue that the original may have been replaced with a copy on these occasions.

In the mid-17th century the sculpture was moved from the Basilica of San Francesco to the Quadrarco of Braccioforte, which is why for a long time the knight was called Braccioforte by those who visited Ravenna.

In the 19th century, it was placed in the Accademia di Belle Arti (Academy of Fine Arts), and later removed for safekeeping during World War II and moved to a villa in the countryside.

Having survived the danger, it was returned to the Academy and remained there until 1972, when it was placed in the Loggetta Lombardesca, that hosts the MAR – Ravenna Art Museum.