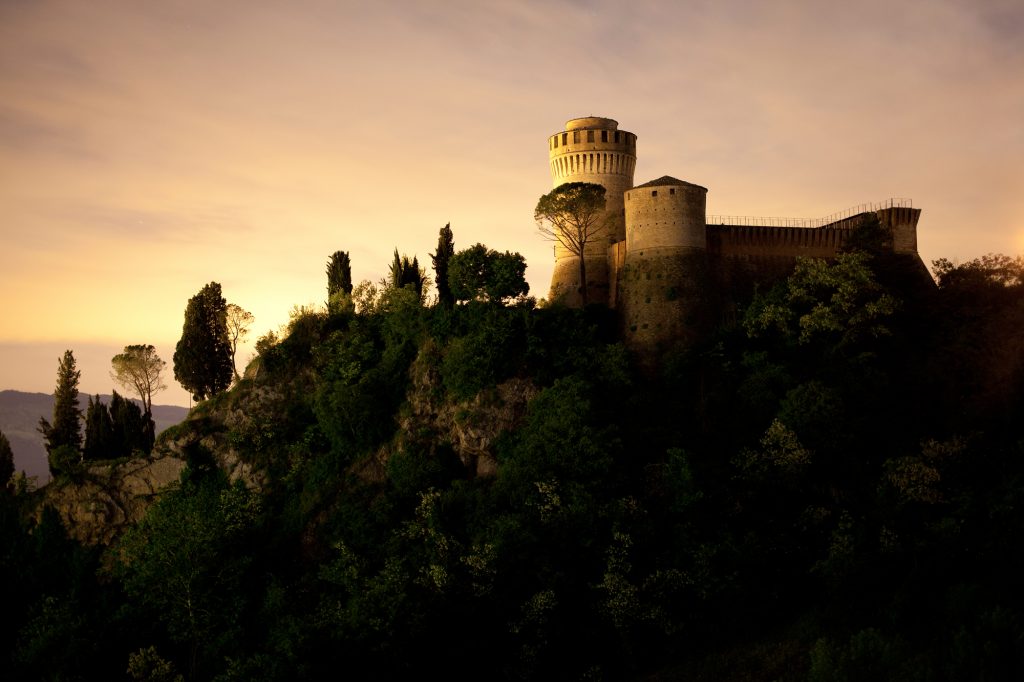 If you are organising a trip to Ravenna and have already planned a visit to its unforgettable attractions, with these 5 ideas for a trip around Ravenna you will have the possibility to enrich your itinerary.

The closeness to the sea, the Po Delta Park with its notable natural landscapes and the beauty of the hinterlands of the Romagna region will inspire you to take a trip beyond the city into the heart of our territory.

In this post we will tell you about five destinations around Ravenna that will allow you to discover the beauty of its territory.

The salt pans of Cervia

Cervia salt is famous for its high quality: in essence it is a whole sea salt that is above all sweet, and that lends itself well to a variety of uses in the kitchen. The salt harvest occurs in the summer months following traditional methods: if you are curious to see it, this is the ideal period!

The site, situated within the Po Delta National Park, is very suggestive: the pinkish reflexes of its ponds provide an unforgettable atmosphere, especially at sunset. From a naturalistic standpoint, there are also numerous species of migratory birds that come to roost in the vicinity, such as flamingos and black-winged stilts.

To become more familiar with the history of the production and trade of salt, we advise you to add a stopover at the Magazzini del sale in Cervia to your itinerary, which today is the site of MUSA – Museo del Sale (the Salt Museum).

About an hour’s drive from Ravenna is the fascinating city of Brisighella.

Brisighella is a perfect destination in every season: In spring, when the Parco regionale della Vena del Gesso Romagnola offers its maximum splendour; in summer, when the evening lights intertwine with breathtaking sunsets and the borgo becomes even more suggestive; in autumn, the season of the countryside sagre (food festivals); and in winter, when the village is dusted with snow and the landscape becomes like a postcard.

This village nestled in the hills of the province of Faenza is truly worth a visit: the small borgo is made truly special because of the Antica Via del Borgo, also known as Via degli Asini (lit. Donkeys’ Road)“. It is a raised, covered roadway dating back to the 12th century with arched holes that served defensive purposes.

The landscape that surrounds the town is characterized by the three hills on which the three symbols of the town are located: the imposing Rocca Manfriediana (pictured in the photo), Santuario della Beata Vergine del Monticino, and Torre dell’Orologio (the belltower).

Located 40 km north of Ravenna, Comacchio is a small town built upon many islands surrounded by water within the area of the Po Delta Park, which was named a World Heritage Site in 1999. And it’s not a coincidence that the town is often referred to as “Little Venice”.

The town symbol is the Trepponti complex, which used to be the gate to the historic center.

If you choose to make an excursion to Comacchio, be sure not to miss the new Museo Delta Antico, where you will discover the area of the Po Delta. The Cathedral of San Cassiano, Loggia del Grano (lit. wheat loggia) and Torre Civica (lit. civic tower), and Loggiato dei Cappuccini (lit. Capuchin portico) also deserve a visit: 142 successive arches that take you from the city center to the old Sanctuary dedicated to Santa Maria in Aula Regia.

Faenza and its ceramics

Faenza is about 40 km away from Ravenna, and it’s worth visiting above all because it’s the homeland of ceramic art. Proof of this is the fact that the term faience, the French rendering of the city name, is widely diffused outside of Italy to indicate this type of tiles.

Faenza was renowned for the artistic value of these products as far back as the 16th century. Ravenna is the capital of mosaics as much as Faenza is the capital of ceramics. In the streets it is possible to find more than 50 workshops that continue this tradition.

Here, not by chance, you will find the MIC – Museo Internazionale delle Ceramiche, an enormous collection dedicated to ceramics.

The historic center of the city on the Via Emilia welcomes visitors within its two piazzas, Piazza del Popolo, and Piazza della Libertà. Palazzo del Podestà and Palazzo Comunale adorn the former while the Renaissance cathedral dedicated to Saint Peter the Apostle rises in the latter.

The two areas are connected by Fontana Monumentale (lit. monumental fountain) in Istria stone and the Torre Civica dell’Orologio (lit. civic bell tower) which are the symbols of the city.

Bassa Romagna, the so-called “Land of Good Living“, is the territory that is comprised of Faenza, Ravenna, and Ferrara. The municipalities in the area are 10: Bagnacavallo, Lugo, Massa Lombarda, Fusignano, Conselice, Alfonsine, Russi, Cotignola, Bagnara di Romagna and Sant’Agata sul Santerno.

While you visit them you can lose yourself in the countryside, between the roads and small paths, and life seems to move at a slower pace. Is there a better place to enjoy a glass of Sangiovese than in a countryside trattoria? We don’t think so!

Every municipality has its particularities and a good reason to be visited. In Russi, for example, you can see a remarkably well-preserved Roman villa, Cotignola stands out for its street art, and Bagnacavallo for its very unique Piazza Nuova.

Ravenna’s surroundings, just like its city center, are brimming with beauty to be discovered. These are only a few ideas that you can take advantage of in order to organize your stay in the territory. But really, what is the best part about travel? Being surprised by the little things that you didn’t expect to find. And for that there is no guide to be followed, just follow your instinct!