Home > myRavenna > City of art > The Church of San Carlino, a Baroque jewel in the heart of Ravenna

The Church of San Carlino, a Baroque jewel in the heart of Ravenna 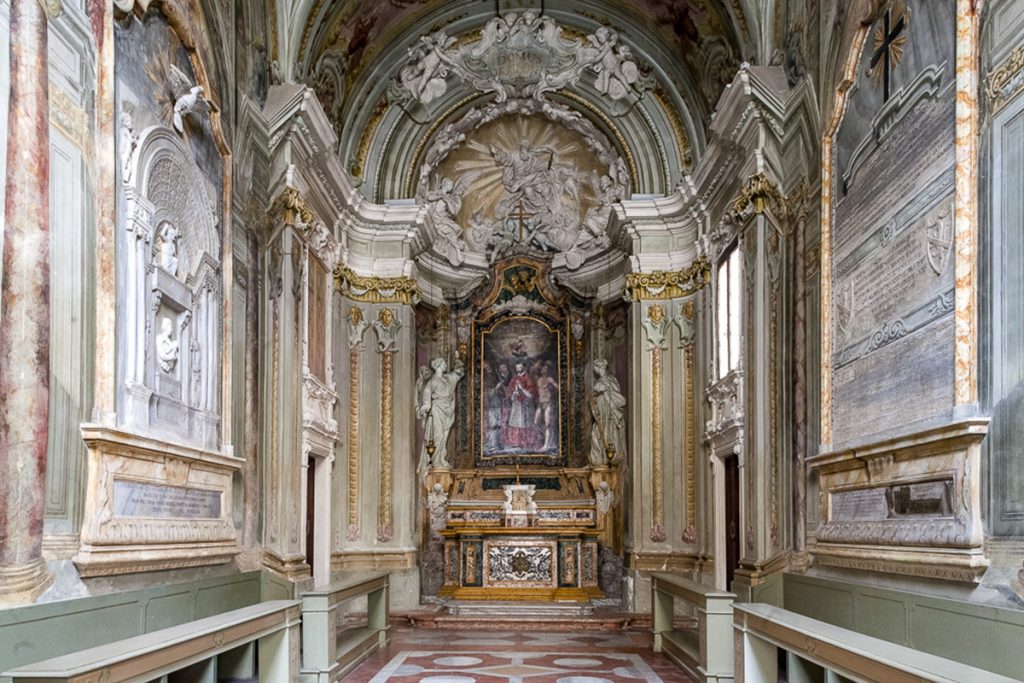 The presence of the Church of San Carlino, originally dedicated to the apostles Simon and Jude and to the martyrs Fabian and Sebastian, is attested to by documents from the year 1000.

The structure was commissioned by Oddone dall’Ova, who consecrated it in 1062. The first owners were therefore the Tombesi dall’Ova, a family of great leaders, who managed the building until the early 1500’s. Their coat of arms was a rampant lion with a lateral band.

The dall’Ova, who were slaughtered by the Rasponi in a dramatic bloody event, were followed by the Dal Corno family, who in 1700 almost completely restored the small oratory, bringing it up to its current appearance. They employed architect Domenico Barbiani, who carried out the pictorial decorations, and decorator Giuliano Garavini, who created the elegant stuccoes. Even today, the Dal Corno coat of arms (a horn with three stars) can be found everywhere inside and even on the handle of the entrance door.

At the end of the 1700s, the Dal Corno family died out and the building’s ownership passed to the Lovatelli family. In fact, there is a plaque inside the small church showing the plan of an old estate donated for the maintenance of this small complex.

In the early 1600s, the building became the headquarters of a confraternity linked to the figure of Saint Charles, made up of lay people and clergy. The title of San Carlo Borromeo, commonly called San Carlino by the people of Ravenna due to the small size of the building, is therefore purely affectionate.

The cult of Saint Charles was established in the early 1600s and the devotional practice immediately spread to Ravenna, where Borromeo had held the position of cardinal legate between 1560 and 1563 and where he had returned in 1583, a year before his death.

Charles Borromeo in his own story will embody the model of the perfect shepherd. Nephew of Pope Pius IV, (the pope who had concluded the work at the Council of Trent), despite his noble origins, had given up the ecclesiastical career that would have surely led him to Rome, in order to follow his flock in the Diocese of Milan. This of course had inspired enormous commotion and admiration, so much so that when he returned to Ravenna in 1583, the devotion to him was very strong.

According to historians, two relics of Borromeo were conserved in Ravenna, which are now missing. One of them was the honestina, the linen towel that the cardinal used during a lunch with the canons of Santa Maria in Porto. After the beatification in 1610, it would even be exhibited as a true relic on November 4, the Saint’s liturgical feast.

Furthermore, the oratory housed, according to Pasolini, a sponge filled with the saint’s blood. Unfortunately, all traces of this object have been lost.

The greatest period of expansion for the confraternities was in the years immediately following the Council of Trent (1545-1565). This justifies the birth in Ravenna of two brotherhoods linked to the cult of Borromeo, a true champion of the Catholic Counter-Reformation: one (called in urbe) was based right here, the other in Borgo San Rocco (called in suburbe because it was outside the walls ).

The main purpose of the confraternities was to “share the faith“, or rather to spread religious orthodoxy, to counter heresy and to pioneer the establishment of parishes in the cities.
They followed a very precise and rigorous liturgy. They marched through the cities on solemn holidays and recited the Rosary in the period of Lent and Advent. Indeed, the reading of the Rosary was the primary tool in the fight against heresy.

These entities also carried out important social functions: first of all, the reading of the Rosary took place in the vernacular language and not in Latin, and this was very important for the purposes of literacy, furthermore they brought both spiritual and material aid to people, and finally, they served as an orientation center to those arriving in the city for the first time.

The interior of the Church of San Carlino

Inside the oratory there is the Altarpiece depicting Saint Charles Borromeo among the four titular saints. The altarpiece, created in 1628, is by Giovanni Barbiani, founder of a family of artists who was active in Ravenna between the 17th and the 18th century.

Carlo’s appearance is prominent within the iconography, so what we see portrayed here is the true face of Borromeo: a hollow face, robust nose, and wearing the characteristic cardinal’s habit.

On the right, St. Sebastian the martyr is easily recognizable because he is tied to a column with the arrows of his martyrdom protruding from his body. On the opposite side, the first on the left, we recognize Saint Fabianus the martyr because he is wearing a miter, as he was the pope of Rome in the 3rd century. Next to San Carlo, the two apostles whom the oratory is named after, Simon the Zealot and Jude the Apostle, are depicted here together because many hagiographic accounts affirm that they were martyred together.

On the left wall of the oratory, we find the Tabernacle, a work from the late 1400’s from the old Basilica Ursiana. According to Corrado Ricci, the creator of the marble Tabernacle was a Lombard sculptor. The exceptional perspective vault details the image of San Satiro in Milan. The client however, was Archbishop Roverella for the old Ursian chapel of the Most Holy Sacrament.

In the old Cathedral, the Tabernacle remained in use until the early 1600’s, when Cardinal Pietro Aldobrandini decided to create a new monumental chapel dedicated to the theme of the Eucharist, entrusting the work to Carlo Maderno and the decorations to Guido Reni.

The marble Tabernacle did not blend in well with its new environment and was therefore initially moved to the chapel of the Madonna del Sudore where it remained until 1759, when important renovations were carried out in that chapel as well.
On this occasion, the Tabernacle was removed and purchased by the Dal Corno family who placed it in the Church of San Carlino and inserted a small bas-relief of the Virgin into it in memory of the devotion of the people of Ravenna to this image.

The paintings in the dome were realised by Domenico Barbiani towards the mid-1700s when the building was completely renovated. The heavens are open in order to confirm the union between heaven and earth and the communion of saints. The medallions present the oratory’s four titular saints.

They are reiterated here to attest to the direction provided by the Catholic Counter-Reformation. Since the Protestant Reformation had abolished many Saints, the Catholic Church filled its churches with figures of holiness. The Four Cardinal Virtues are represented to reaffirm one of the main purposes of the brotherhood, to lead a virtuous life: prudence, justice, fortitude, and temperance.

In 1792 the oratory was first reduced to a cellar, then afterwards was closed to the public, and in 1808 was finally donated to the adjacent orphanage.