Home > Around Ravenna > Inland from Ravenna

A trip in the land of good living: Bassa Romagna

Looking inland from Ravenna, the city is surrounded by a landscape cut by streets and alleys that is a real pleasure to run on a bike.

This territory has a specific name and identity that goes by the name of “BASSA ROMAGNA”.

Besides Lugo and Bagnacavallo, the Union of Bassa Romagna is made up of seven more municipalities (Alfonsine, Bagnara di Romagna, Conselice, Cotignola, Fusignano, Massa Lombarda and Sant’Agata sul Santerno).

A vast area stretching out between the Via Emilia and the Valleys of Comacchio, scattered with precious places, events and stories all to be discovered. The beautiful nature and its important rivers, such as Lamone, Reno and Senio; history with its parish churches and castles; culture, with festivals and feasts, street and land art. 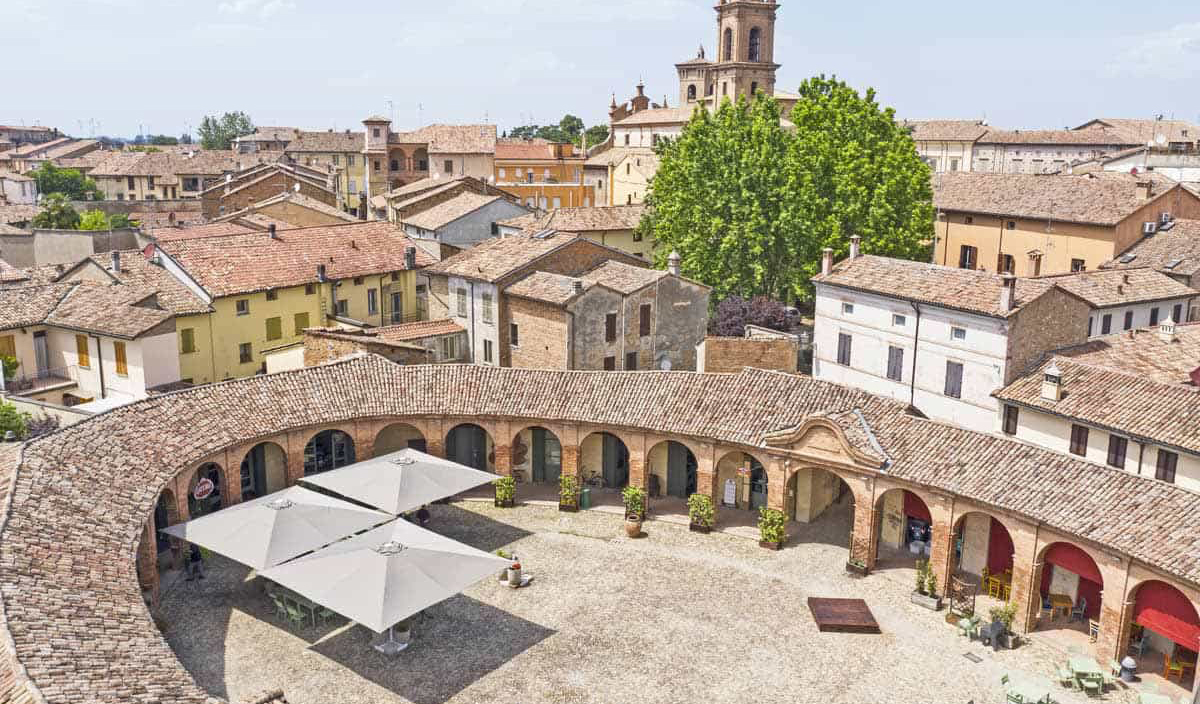 BAGNACAVALLO is for sure one of the most interesting tourist destinations of the hinterland of Ravenna. The nucleus of the city centre is a maze of alleys that unravel around Piazza Nuova, a square of medieval origins unique in its kind. Oval-shaped and embraced by porticoes, the piazza is today a parlour with boutiques and a typical inn.

Another interesting destination is the Church and Cloister of San Francesco, location of performances and accommodation facility for tourists and visitors.

Just outside the centre, the Parish church of San Pietro in Sylvis is of outstanding beauty (7th century AD). It is one of the best preserved churches in the territory: built more than a thousand years ago, it is also a stop along Via dei Romei.

The city of LUGO has two main symbols: one is the city centre, dominated by its Rocca Estense, a charming castle dating back to the 13th–14th century with a splendid roof garden; and by the so-called Pavaglione, an imposing four-arched portico of the Risorgimento, today rich of shops and pubs.

The second is the legendary Francesco Baracca, hero and aviator of the First World War. The city paid homage to Baracca with an imposing monument, standing in a square with the same name, as well as with a fascinating History Museum, located in his birth house, just a few steps away from the city centre.

Romagna is also the land of motors, though. At the end of September, Lugo hosts the “Rombi di passione” festival, during which the city turns into a circuit with both antique and modern vehicles racing or parading.

The hinterland of Ravenna preserves many other opportunities that can be discovered during a trip.

In Russi, you will see the ancient Roman villa, maybe one of the best-preserved archaeological finds in the North of Italy, as well as Palazzo San Giacomo, a noble country house of the great Rasponi family.

In Bagnara di Romagna is the Rocca Sforzesca, unique example of a medieval castle in the Emilia-Romagna region.

And there is street art in Cotignola, with many works dedicated to the local history and little museums that preserve important puzzles that are meaningful for the collective storytelling of this place. Lastly, the area hosts some important events related to land art, such as Terrena and the suggestive “Nell’Arena delle Baglie di Paglia”.