From Byron to Cole Porter, 5 famous travelers in love with Ravenna 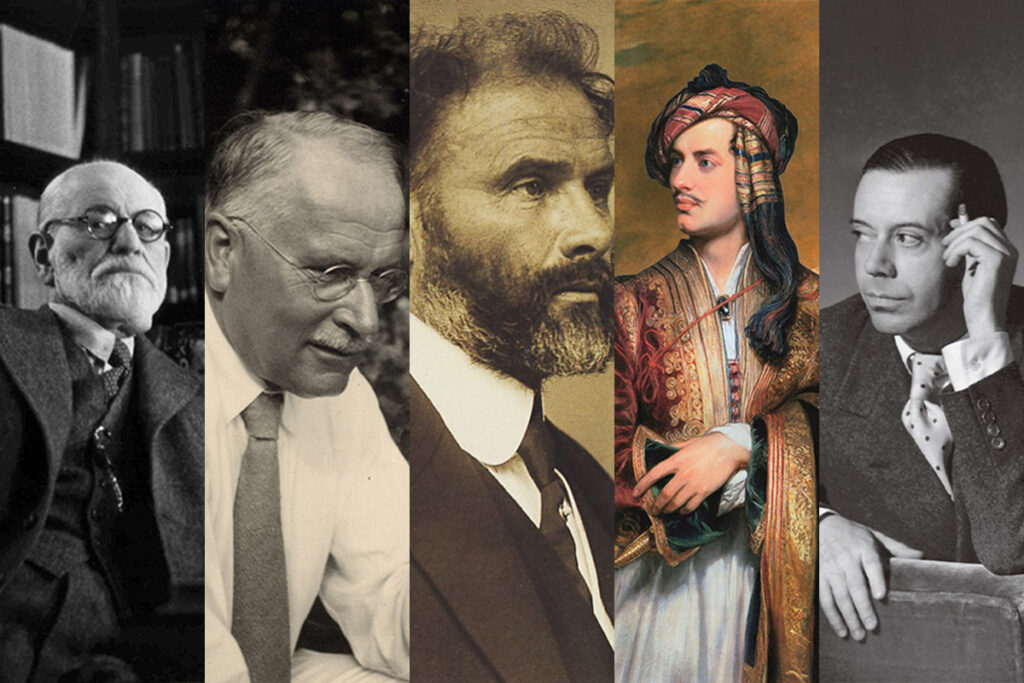 Over the centuries, Ravenna has been a destination for thousands of travellers who wanted to admire the mosaics of its early Christian and Byzantine basilicas.

Ravenna has been a destination for many VIPs of the past who, with different characters and attitudes, discovered the beauty and uniqueness of this city.

Just like contemporary celebrities, they left behind thems a lot of fame but also criticism and scandal.

So many different stories but with a common trait: the desire to experience and live the beauty of Byzantine art.

All the love of Lord Byron

Eccentric, passionate adventurer and exhibitionist. We are talking about LORD BYRON (George Gordon Noel Byron), English literary nobleman and one of the greatest exponents of English romantic poetry.

Although he lived a short life (only 36 years!), he managed to create – voluntarily or involuntarily – a legend around his figure.

Attractive and dark, women liked him so much that he had more than 200 partners.

Originally from England (specifically from London), he decided to travel across Europe to write his poems.

He moved to Ravenna in 1819 because of his overwhelming love for a young woman, Teresa Gamba Ghiselli, the wife of Count Alessandro Guiccioli, who was described as the most beautiful woman in the city.

The nobleman soon became Teresa’s official lover and her husband allowed him to stay on the first floor of their palace in Via Cavour (right where the new Byron Museum will soon open).

The love and closeness with Teresa Gamba had a very positive effect on the poet, who spent a happy and productive period in Ravenna.

In the Byzantine city he wrote three cantos of his Don Juan and other poems, including “Dante’s Prophecy”.

In Ravenna, Lord George Byron also got close to the Carboneria, harbouring fugitives and hiding weapons.

By doing so, he made Alessandro Guiccioli nervous, who put up with it for a while, then denounced him and forced him to flee.

The Golden Gaze of Klimt

100 years after Lord Byron, another well-known and loved artist arrived in the city: GUSTAV KLIMT.

In 1903, in search of inspiration for his art, Klimt visited the Gothic and Byzantine monuments for the first time and enjoyed them very much.

The burly and lazy artist rarely travelled from Vienna, but he was so struck by the light of the mosaics of Ravenna that he came back twice in the same year.

Thanks to the postcards he wrote to his partner Emilie Flöge, we know that he considered the mosaics in Ravenna to be incredibly beautiful.

The golden glitter of the Byzantine tiles would, over time, become a distinctive feature of his ‘golden decade’.

The combination of the richness of the mosaics of Ravenna and the Viennese Workshops gave rise to some of his most famous masterpieces including: Judith (1901), the Portrait of Adele Bloch-Bauer (1907) and The Kiss (1907-08).

From his visit to Ravenna until the end of his life, the eternal and luminous gold acquired a strong expressive value and remained the protagonist of his works.

Art, literature but also pseudoscience. Both fathers of psychoanalysis, Carl Gustav Jung and Sigmund Freud, passed through Ravenna. They were struck by the beauty of the place, but above all,  the city remained an indelible memory in their subconscious.

SIGMUND FREUD came to the city in 1869 and initially he was very disappointed. He imagined that he would find himself in a noble city, but he found it very different.

He described it as full of poor people and vagabonds, and wrote that the great historical monuments were not valorised enough. He appreciated only three things: the mosaics, the figs picked next to the mausoleum of Theodoric, and wine.

However, Ravenna will return to visit Freud in his dreams, leaving a very strong message: the dream analysis highlights physical and symbolic decadence (the difficult conditions of the city at the end of the 19th century), but also a sign of rebirth (the white water lilies floating in the black water).

The suggestive visions of Jung

In 1914, also CARL GUSTAV JUNG visited Ravenna with one of his assistants and had a paranormal experience.

They wrote an essay on the original ritual of baptism inspired by a particular mosaic in the Neonian Baptistery. They watched for about twenty minutes how Christ held out his hand to Peter, who was about to drown in the waves.

After leaving the city, Jung felt the need to see the mosaic again to explore the theme of rebirth through baptism. He even asked a photographer from Ravenna an image of the mosaic that had impressed him so much.

Jung’s surprise and dismay were enormous when he learnt  that that specific mosaic didn’t actually exist.

In his memory, despite the evidence, Jung still retained a very clear memory of the mosaic of Peter drowning. The perception had been so strong to seem real.

In 1932, the dome of the Mausoleum of Galla Placidia was said to be the muse for a great jazz classic.

The famous American composer COLE PORTER was in Ravenna on his honeymoon. The musician, after seeing the striking golden stars on  the blue mosaic sky, is said to have found inspiration and subsequently to have written the song ‘Night and day’.

written for the musical comedy Gay Divorce,  the songsoon became one of the most famous compositions in his repertoire and is still played today by hundreds of musicians and singers.

Nobles, artists, the fathers of psychoanalysis and many others have been overwhelmed by the uniqueness and splendour ofthe monuments of Ravenna . This means that Ravenna is a city that brings with it inspiration, change, art and charm.

It is a treasure to visit at least once in a lifetime!