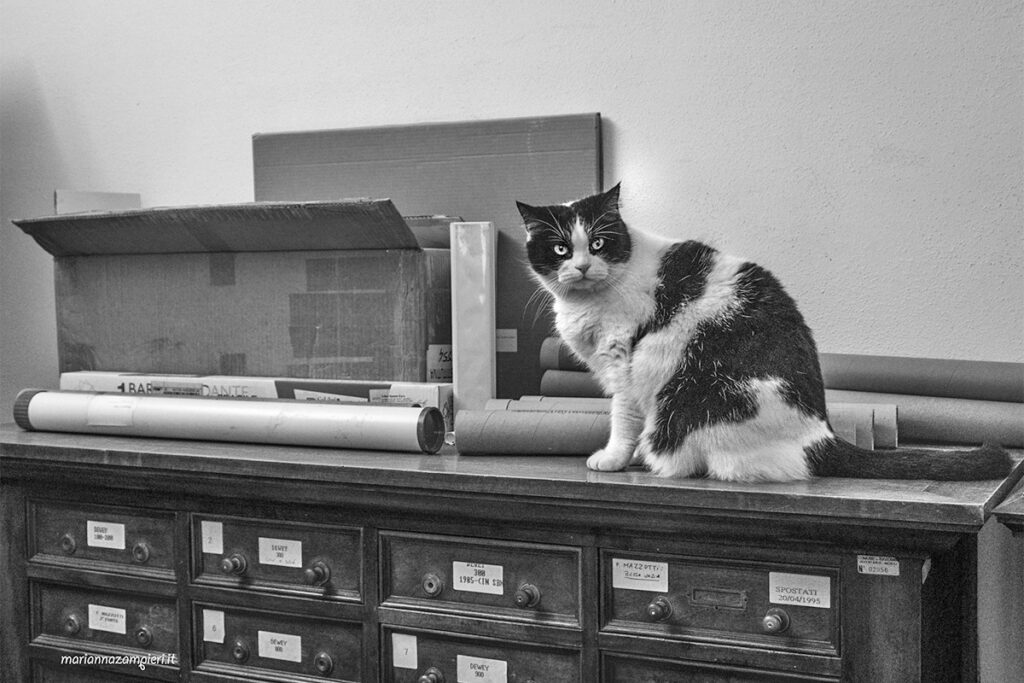 Inside the marvelous Camaldolese Monastery, first erected in 1515 and considered to be a true architectural and artistic gem, the great Classense Library hosts not only 800,000 precious printed volumes, but also – as archivist Claudia Foschini proudly recounts – hosts, cares for, and protects a small and very beloved community of living creatures.

Whereby “living” we mean – in antithesis to the thousands of precious “objects” conserved here – a hundred-year old turtle (Santino), a couple of cats (Teresa and Byron) and even a swarm of bees.

These animals, with the exception of the swarm of bees which is at the moment confined to the San Romualdo belltower, are free to live as they please in the entire complex, promenading undisturbed in the cloisters and the rooms of the library. The only off limits sections for them are the storage rooms which they could get trapped in and the room dedicated to those who suffer from allergies.

Otherwise, whether Byron is running along the bookshelves or whether Teresa is curled-up on top of the book loan desk, it’s considered fair game, and actually it’s something that everybody hopes for, as they help provide a sense of wellness and improve the quality of life for whomever works and studies here.

For years this unusual vocation of the Classense Library has been a source of inspiration for tour guides, (such as the “Guida di viaggio per gattofili, 17 luoghi gatteschi in Italia”, lit. “Tour guide for cat lovers. 17 catty places in Italy), mentioned in multiple cultural reviews and articles, and has become an attraction providing kind, furry company for visitors and readers.

Daily care for this small community of animals is provided by a long-time volunteer, Ms. Brunetta who in the morning makes her first rounds, cleaning their bedding, feeding the cats, and ensuring a portion of lettuce or a bite of apricot to Santino. Around 5 in the afternoon, before the librarians and employees leave the complex, she returns to “tuck the cats into bed” in their assigned room, which is kept safe by an alarm system and is furnished with every possible feline comfort.

The oldest and most venerable guest is Santino. His presence was already documented by the Catalog of Santi Muratori, the director of the Institute from 1913 to 1943, in the register titled “local subjects” which details his story.

Through this register we know that, in 1943, the turtle was donated along with a collection of books by the scholar from Ravenna Umberto Maioli and that during those times the Library hosted another pine turtle since the 20’s. It was archivist Claudia Foschini who named the turtle Santino (in memory of the past librarian and director) and for her love and experience with horseback riding and natural affinity towards animals, she was designated forever more as the caretaker of the Classense’s odd and adored family.

Therefore, going by the dates, the turtle has abundantly surpassed his 100 years of life and with a prideful scowl and a healthy dose of aggression (typical in turtles, Doctor Foschini ensures us) he lords about the cloisters of the Dead, except for when he decides to visit the great cloister when it isn’t occupied by crowded events.

When, in 2003, a foolish worker, who worked on the restructuring of the building, callously abducted the turtle, he was immediately and unanimously condemned. The then director Donatino Domini, having quickly figured out what was happening, called the company and threatened to report the perpetrator to the local police if Santino weren’t immediately returned to his home.

The story of the adoption of the cats is – if possible – even more fascinating. As Doctor Foschini recounts, even today with a bit of apprehension, during the holiday weekend of June 2, 2009, four tiny kittens were trapped in a wing of the Library that was undergoing renovation, and were separated from their mother.

These four splendid kittens were named Dewey (after the decimal system), Obama (in honor of the then newly elected President of the USA), Teresa (the only female) and Byron, in memory of the most famous couple from Ravenna.

At the time, Doctor Foschini and her colleague Sandra Dirani immediately went about building a complex support system in order to nurse and adopt the kittens and did not hesitate to bring them to their homes until they were 3 months old, and afterwards hosted them again whenever they needed additional care.

Years later, Dewey became fatally ill of feline anemia, whereas Obama is presently undergoing treatment for his diabetes at Sandra’s home. Teresa and Byron, on the other hand, reside within the walls of the Classense library, where they are loved and pampered by all.

So much so that, one day at the end of August last year, after not being able to find Byron, a massive search operation was dispatched, with several messages appealing: “If you see him please alert us” along with sections in the local paper, all with the aim of finding the cat, who was quickly tracked down in the nearby via Rondinelli where several neighbors unknowingly opened their homes to him.

Besides a small bat that, despite Claudia’s loving care and a successful operation by wildlife volunteers, didn’t make it, this brief summary concludes with a thought dedicated to the other beloved guests of the Abbey in via Beccarini, the bees.

These animals are a symbol of holiness (as depicted by the mosaics within the apse of the Basilica of Sant’Apollinare in Classe) and have been permitted to reside within the belltower of the Church of San Romualdo.

It is in fact an entire swarm of bees, for which the initial idea was to manage a beehive. This was the result of a start up project designed by youths from Faenza, who were to establish the hive within the great cloister, but having then been seen as a potential danger to guests with allergies, the close-up company of these animals has been declined for the time being.

The Classense Library and Saint Romuald: when the monastic ideal passed through Ravenna

The Ravenna of Lord Byron, the most eccentric of the Englishmen