Home > myRavenna > City of art > The gates of Ravenna

The gates of Ravenna 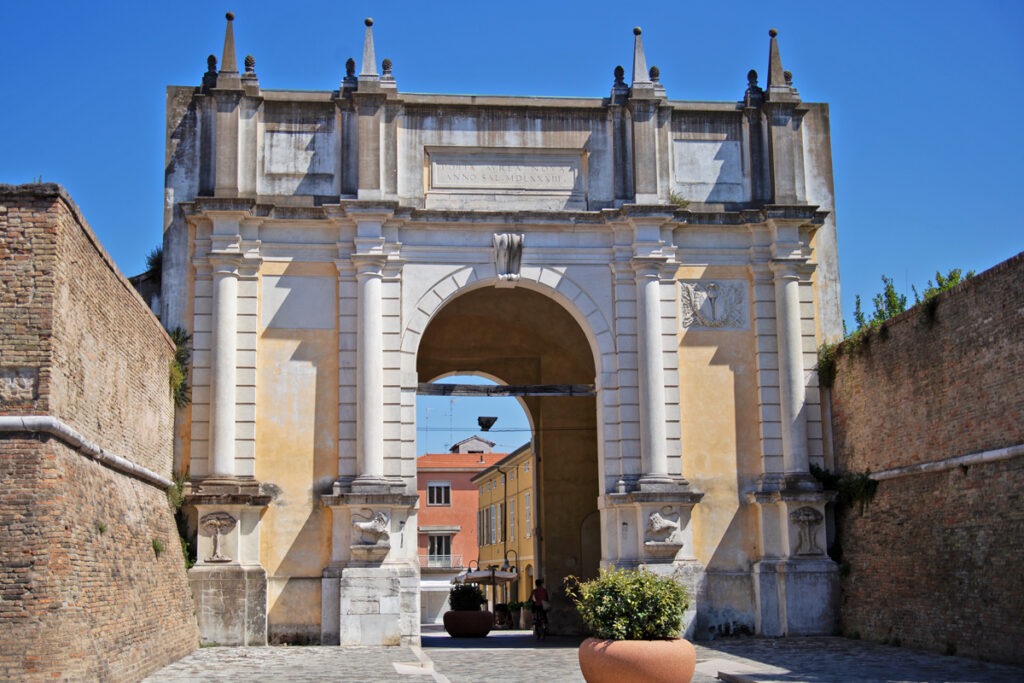 Gates are symbols, traces of a Ravenna suspended in another era. A span of time far removed from kingdoms and empires, but straddling the fundamental centuries between the Renaissance and the Unification of Italy.

While the walls have given way or have been dismantled over the course of time, having become obsolete, the city’s gates have been conserved, protected, and renovated. They remain there, like pins in the fabric of the city, to remind us of its glorious history and to renew the ideas of beauty and tradition.

Let’s start off with an exception. This gate is not really a gate. It has all of the characteristics of a gate (located at the far southern end of Borgo San Rocco) but was not located along the perimeter of the walls. What was its purpose?

Cardinal Gonzaga had it built on the occasion of the renovation works on the road to Forlì in 1785. It is from him we receive the name of this valuable artifact, which is hence moreso a celebratory arch than a true access point into the city.

According to Corrado Ricci however, it is not unlikely that it was built in the place where a fortified outpost once stood near the city walls.

Porta Adriana is the biggest, the most famous, and probably the most beautiful as well. It marks the confines of the historic center, between via Cavour (one of the main pedestrian streets) and piazza Baracca. It is the first and perhaps most explicit example of the troubled life that all of the gates of Ravenna have in common.

It was given its name in memory of the Andriani family, who were wealthy local lords. Built in an undetermined period, it was subsequently moved and reassembled on the site of its current location. It was enriched with the marbles from the Porta Aurea, of Roman origin, which was demolished in 1545. During the period of Venetian dominion it was further enriched by two lions, later mutilated towards the end of the 18th century.

The facade was enlarged, the side towers became stout square bastions and the bridge on the Montone river, which flowed through it and then around the historic center, was demolished in 1774. Pope Pius IX, who visited the city in 1857, adorned the city with spires and decorative pines. It is a history of constant change, a history that all of the city gates share.

From the outside it is possible to see an arrow pointing to a black bison and the number 82. The insignia is almost certainly that of the 5th Infantry Division “Kresowa” of the Polish army, which perhaps passed through Ravenna before or shortly after the breaking of the front along the via Emilia. Courageous and quarrelsome, the Polish soldiers left a symbol of a crucial point in our collective history on that wall.

PORTA SERRATA (OR ANASTASIA OR CYBO)

There are three names for this gate. A large gate at the end of Via di Roma, marks the start of one of the few gently sloping sections of Ravenna.

Its first name, Serrata, seems to come from a legend linked to the Da Polenta family, who lorded over the area between the end of the 13th cenury and the middle of the 15th century. It seems that a prophecy had predicted their expulsion from the city through this very gate. Because of this, they had it walled off and it remained this way for many decades, until Pope Julius II reopened it, but only in 1511.

The name Anastasia was given to it in honor of Nastagio degli Onesti, an eminent man from Ravenna of the 12th century, protagonist of one of the novellas of Boccaccio’s Decameron.

Cybo, on the other hand, refers to Cardinal Cybo, who had it restored after a collapse in 1600 and left his name on it. The people of Ravenna however did not accept this ordinance and continued to call it Porta Serrata.

Porta Nuova is located on the opposite side of Via di Roma and closes the north-south trajectory of the city walls. Rebuilt in 1580 (hence the term “New”) it was restored in the mid-1600s, perhaps based on a design by Bernini. It is one of the most beautiful ones in the city, and for the people of Ravenna it is always “New”, even if it is over four hundred years old.

Cardinal Donghi, who was responsible for the restoration, was the promoter of the excavation of the “Pamphilio” canal which had the task of connecting the city to the old Candiano port. Two tombstones at the base still remember that great civil engineering feat.

At the beginning of the 1900s, the tramway on rails that connected Ravenna and Forlì passed right under the gate (then still connected to the walls) and included the “Porta Pamphilia” stop.

Of the two names, one is perhaps the diminutive of the other. In documents from various eras there are traces of a Porta Ursicinis, then Usisina, Sisina, Sisna, Sicina, and finally, in 1600 the name Sisi appears. Ursicino, a Catholic saint of Ligurian origin, was a martyr in Ravenna in 66 AD.

In 1568, it was rebuilt in its current harmonious form, adorned with two beautiful granite columns that support the pediment on which the date of the renovation is carved. This door was, and still is, suffocated by older buildings, between via Mazzini and Via Castel San Pietro, so much so that it looks like an arch, almost a portico, if you aren’t looking closely.

A curiosity: in a municipal statute of 1200 it is forbidden, verbatim, “for prostitutes and pimps to loiter in the public street, especially in the vicinity of Porta Ursicina and Porta Anastasia”.

Why it is only mentioned on these two gates, however, we cannot know.

Its name derives from the church and monastery of San Mama, which stood in the vicinity.

Built in the 11th century as part of a defensive complex called “The Bastions”, Porta San Mamante witnessed the beginning of the Battle of Ravenna in 1512. Only 90 years after those bloody battles could the gate be considered fully restored.

In the past, the Padenna Canal entered the city between this gate and Porta Sisi, and flowed through to the opposite side near Porta Serrata, after having crossed the whole city.

The gate that doesn’t exist. In the Roman period it was the main access route to the city. In front of it, where the hospital stands today, was one of the main naval ports of Ravenna, home to the powerful fleet of the Adriatic.

It is believed to have been built in the mid-1st century by Emperor Tiberius Claudius, the same person who had built the first walls of Ravenna. It was certainly decorated opulently, rich with marble and inlays.

Today only the bases of this majestic entrance to the city remain. The two main towers were demolished by the Venetians in the 15th century and a century later they were dismantled to obtain their ornamental materials for the construction of other gates.

It was undoubtedly a prestigious door, some even say it was even golden, and from this we get the name “Aurea”. In the “Lustri Ravennati” written by Serafino Pasolini we read that “it was adorned with two enormous mirrors, so that the triumphant could be reflected in them as they entered the city”.

In addition to being a gate then, it was therefore also a “Triumphal Arch”, which increases our disappointment for such a sad and undeserved end.