Home > myRavenna > City of art > The church that became a theatre: the story of the Rasi Theatre of Ravenna

The church that became a theatre: the story of the Rasi Theatre of Ravenna 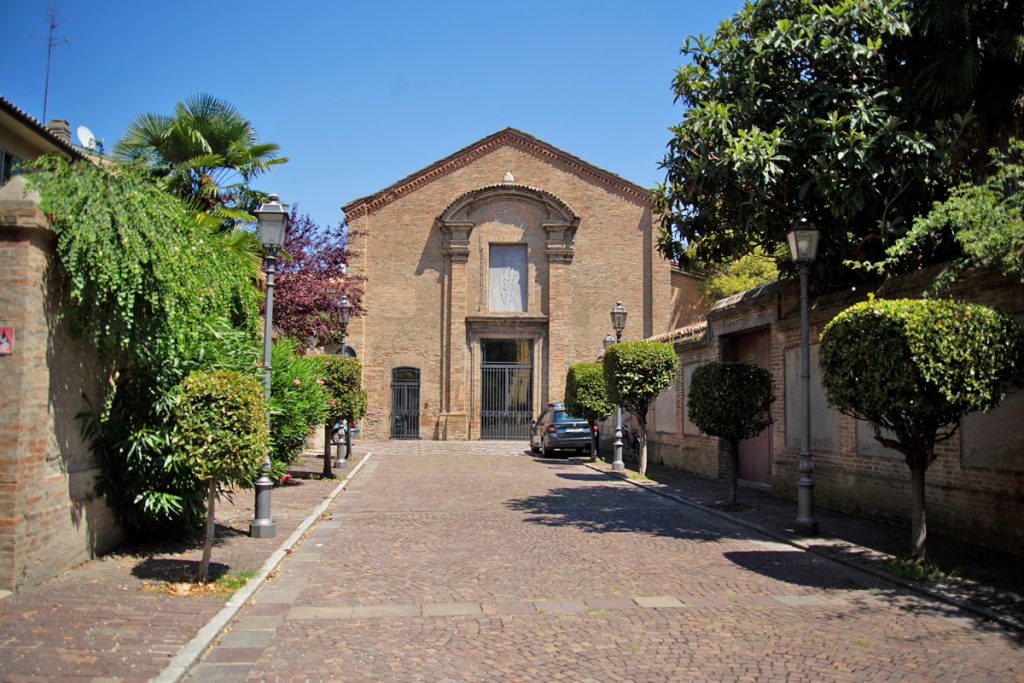 For the travellers that are interested in culture, Ravenna is the ideal destination: its great UNESCO monuments and the beauty of its mosaics are testimonies to its great history.

Along with the value of its artistic heritage, another good reason to visit Ravenna is to come to the theatre. One of the theatres of the historical center hides an ancient story within its structure. Ravenna is a city rich with stories to uncover, with some being more well-known than others.

Do you know who the Da Polenta were?

The da Polenta were a noble family from Ravenna (1275-1441). It was the main Guelph family of the city and at its head was the figure of Guido the Elder, who became the lord of the city in 1287.

If you have not previously heard of him, surely you have heard of his daughter, Francesca da Polenta, made famous by Dante’s story about her love for Paolo in the 5th canto of Inferno.

A less gossiped about member of the family was Suor Chiara da Polenta, Francesca’s sister.

In 1255, along with a community of Ravennese Poor Clares, she founded a monastery and a church dedicated to Santa Chiara (Saint Clare) – which is now the Rasi Theatre – leaving a significant cultural building to the city.

The community of Santo Stefano in fundamenta Regis grew on the foundations of what today is believed to have been an ancient imperial palace, or perhaps an oratory.

A the end of the 18th century, Camillo Morigia – the architect who designed Dante Alighieri’s Tomb and the facade of the Basilica of Santa Maria in Porto – redesigned the church and the adjacent monastery, which were almost completely rebuilt.

After centuries of continuous activity, the life of the monastery was abruptly ended in 1805, due to its suppression at the hands of Napoleon.

But this monastery wasn’t the only one of the city to be closed: the same fate befell the Camaldolese Monastery (today hosting the Classense Library) and to the Monastery of San Vitale (today hosting the National Museum). The convent building was demolished following its closure but the church and its cycle of frescoes in the presbytery were spared.

The frescoes, attributed to Pietro da Rimini and dated to the second decade of the 14th century can today be admired in the National Museum, where they were moved so that they would be better protected. They represent the story of the Salvation, the Evangelists, and the Doctors of the Church.

Today the great Ravennese artist is remembered above all for his dedication to the search for a method of acting that would be more spontaneous and less artificial.

Today the Rasi Theatre, located in Via di Roma 39, is the headquarters of Ravenna Teatro, the center for theatrical production founded by the theatre companies Teatro delle Albe and Drammatico Vegetale.

The prose theatre season that it hosts is always remarkable: the offerings are very interesting and relevant to the panorama of contemporary theatre. Among the many initiatives, the “Cantiere Dante” by Marco Martinelli and Ermanna Montanari deserves special recognition.

Besides the theatre season, the Rasi Theatre hosts many other initiatives throughout the year, and is the home to important events such as the Polis Teatro Festival and the famous Ravenna Festival.

What remains of the ancient church is the facade, the current entrance to the theatre, the apse, inserted into the scenic area and made of the same ancient bricks. This characteristic confers a suggestive character to the ambience, especially to the refined and intimate nature of the stage.

In closing, the Rasi Theatre proudly displays its history, and carries this history onto the stage with each production.