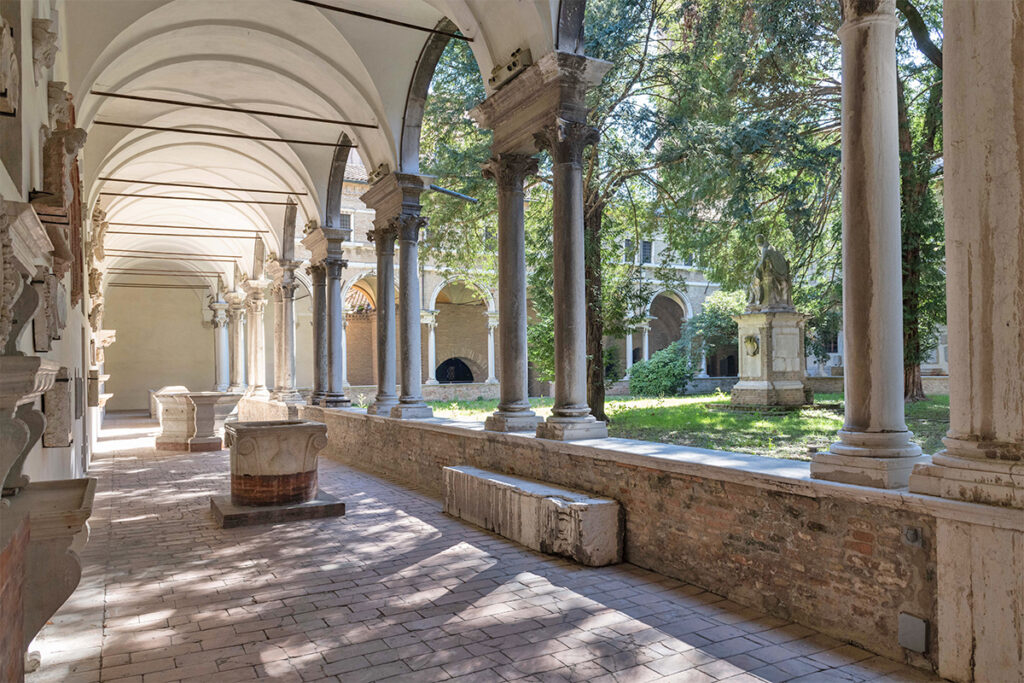 As in much of Europe, from the first decades of the Middle Ages, several monasteries began to appear around the walls of Ravenna, which in a short time became, with their factories, characteristic elements of the city fabric.

Among these there is the Benedictine Monastery of San Vitale, now in part headquarters for the collections of the National Museum, located in via San Vitale.

Only a few sections of the cloister walls remain to testify to the presence of the oldest buildings, which appear to have been incorporated in subsequent renovations.

There is no precise information regarding the date of the monastery’s foundation, although it is assumed that this occurred during the 10th century.

Throughout the Middle Ages and in the following centuries, the monastery of San Vitale benefited from the protection of the archbishops of Ravenna, popes and emperors who enriched its assets.

Despite this, in the 13th century the monastic community experienced a crisis from which it never managed to completely recover.

Cloister of the Basilica of Sant’Apollinare Nuovo

At the Basilica of Sant’Apollinare Nuovo, on the other hand, you can see a cloister from the 16th century, which in the past was certainly part of a monastery. Its foundation dates back to 973 and was commissioned by Petrus dux et comes (latin inscription) who, through a donation, entrusted the place to the Benedictine rule.

Over the centuries, the monastery was enriched thanks to donations and concessions of goods up until the 16th century when, as the Benedictine community that managed it had fallen into decline, it was replaced by the Minor Observant friars who moved there after the Battle of Ravenna in 1512 .

This battle is also connected to the story of the building of the former monastery of Classe, so called due to the fact that, despite being located in the city of Ravenna, the monks of Sant’Apollinare in Classe had moved there following the terrible clashes to be safer, within the city ​​walls.

In the historic center, it is also possible to see the Monastery of San Nicolò. Dated to the second half of the 13th century, it was built to house the community of the Augustinian Hermits.

As it was in the other cases, the monastery of San Nicolò underwent several series of works too, which gradually led to the current situation that has convent structures serve as the home of the Tamo Museum – All the Adventure of Mosaic.

The convent of San Francesco, located next to the basilica of the same name in the historic center, was named after the transfer of the Franciscan friars in 1261.

Originally it was a basilica, built around the middle of the 5th century AD, first dedicated to the Apostles and, later, to San Pietro Maggiore. The Renaissance cloisters of the original convent are still preserved today.

The 16th-century one, which leads to Museo Dante, was once also connected to Dante’s tomb, as the Franciscans were its custodians.

Monastery of Santa Maria in Porto

At the end of the 15th century, a group of Augustinian monks who had their headquarters in the current town of Porto Fuori decided to expand their structure and move inside the city, in an area that had not been developed until then.

The works began in 1494 and already by 1503 the structure was ready to welcome the first faithful. In 1520 the works were completed, designating it as the most significant monument of the Venetian period in Ravenna.

Despite the various renovations and adaptations to serve different uses of the structure, today part of that building is visible by visiting the MAR – Ravenna Art Museum.

The luminous quadrangular cloister (perhaps the most beautiful of its kind in Ravenna) is still preserved and ends along the side of the Public Gardens with a beautiful lodge known as Loggetta Lombardesca.

In 1515 the Benedictine community of Camaldolese rule, established in the year 1000 in the area of the Basilica of Sant’Apollinare in Classe, moved to an area that they owned within the city walls.

This gave rise to one of the largest Camaldolese monasteries in Italy and remained active for three centuries until the Napoleonic era suppression of religious orders.

Today the complex is the headquarters of the Classense Library, which jealously guards in its ancient spaces, renovated and restored over the decades, one of Italy’s most precious book collections. It is possible to book guided tours of the Classense and the archives.