Home > Culture and History > Memorials > Column of the French

Column of the French

Running along the left bank of the Ronco river, in the area of Madonna dell’Albero, it is possible to notice a marble stele surrounded by tall cypress trees.

It is the so-called COLUMN OF THE FRENCH (in Italian Colonna dei Francesi), a memorial sculpted in 1557 by Cardinal Pier Donato Cesi, archbishop of Narni, in memory of one of the most terrible massacres in medieval and modern history: the battle of Ravenna (see focus).

It is a square column made of Istrian stone on top of which is a carved Ionic capital holding a stone cube and sphere.

In addition to the Latin inscription commemorating the client and the date of the battle, there are also two brief descriptions of the battle: “In memory of the French and Spanish who were killed here and so that time will not destroy the memory of this event”.

During the Napoleonic occupation, the column was hidden from view and then moved by a few metres. Since 1972, the monument has regained its original position. 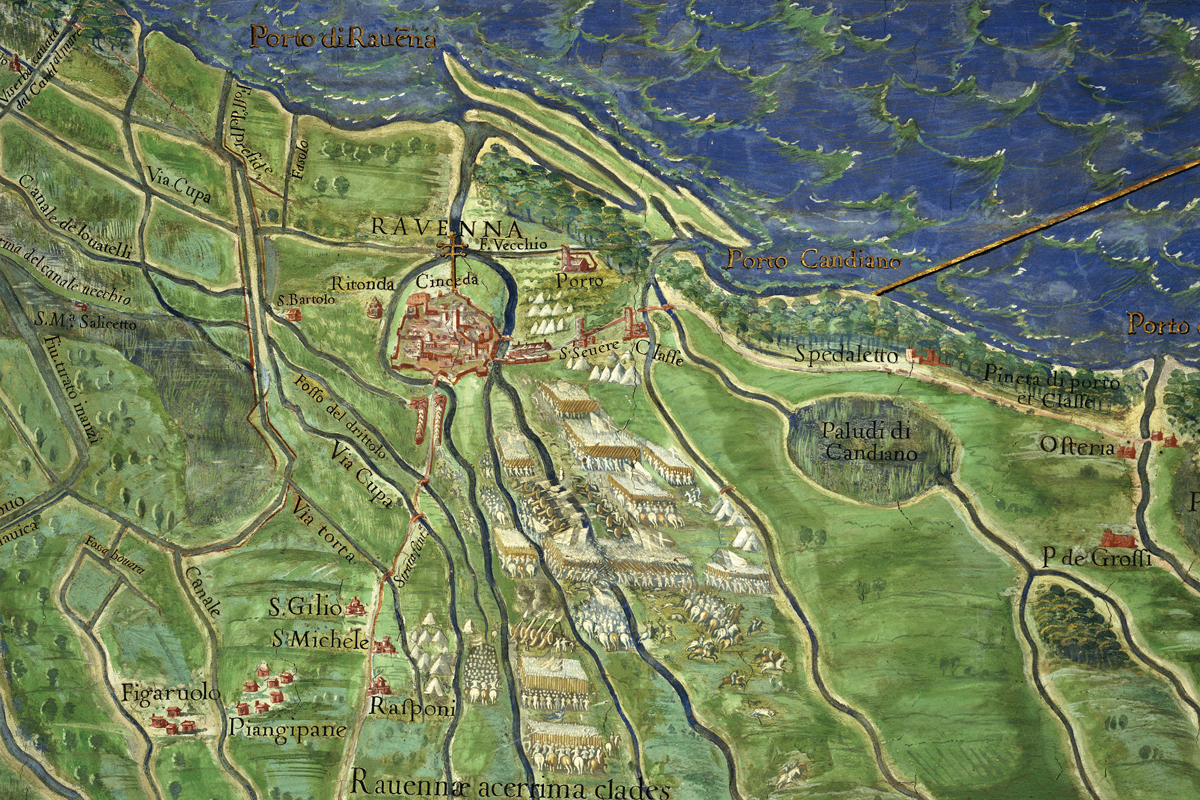 The battle of Ravenna

According to the chronicles, on Easter Sunday, April 11th 1512, in the plain between the Ronco and Montone rivers, took place one of the most terrible massacres of medieval and modern history.

For eight hours, the opposing parties of the French and the Este family fought against the so-called Holy League, formed by Spain and the Kingdom of Naples.

It was a violent battle, where about 20,000 soldiers (from Spain, Naples, Germany, Venice, Ferrara and France) lost their lives, including Duke Gaston de Foix-Nemours. It seems that important figures such as Cavalier Baiardo, de La Palisse and Ludovico Ariosto took part in the battle.

At the end of the battle, Ravenna was ransacked by the victorious troops.

The story goes that this was one of the most violent conflicts of all times, as it represented a turning point of the modern world, and the rise of heavy artillery.

The area is fully accessible.

How to get there

The monument is located outside the historical centre of Ravenna, along via Ravegnana towards Madonna dell’Albero.

By bus: bus stop 600 metres away (bus no. 3) in via Ravegnana. For more information on bus routes: www.startromagna.it

By car: leave the centre and drive towards Forlì on via Ravegnana, until the small town of Madonna dell’Albero. You can leave the car along the bank of the Ronco river.