The rivers of Ravenna 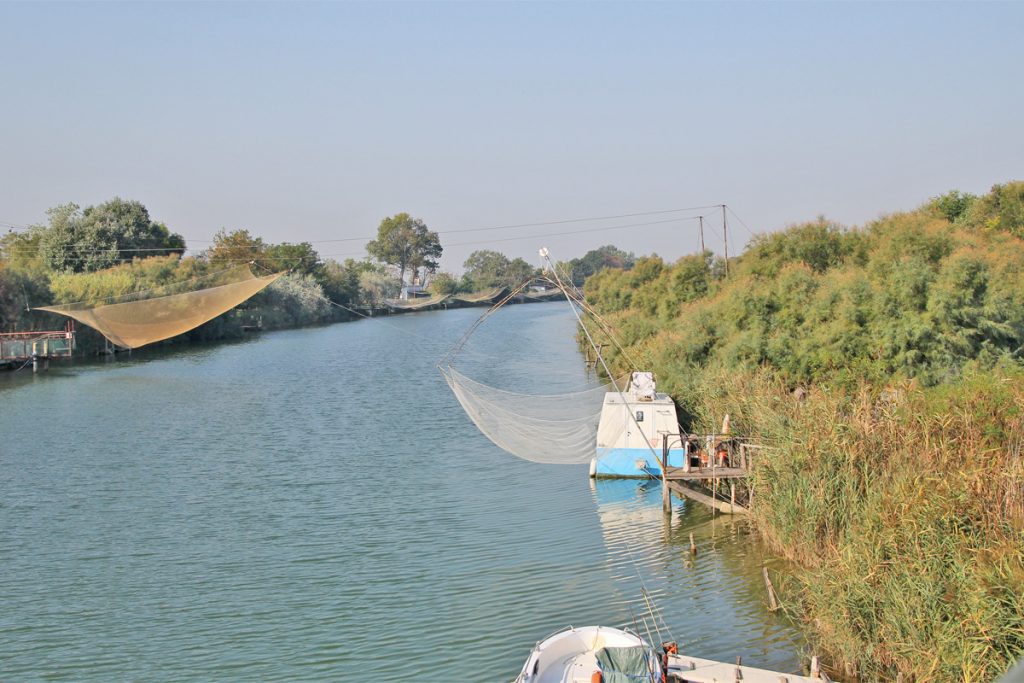 Ravenna and its waterways feature prominently in Dante’s Commedia, the place where actually died on the night of 13-14 September 1321.

The Supreme Poet made numerous mentions of rivers, either by quoting the exact name of the waterways or through poetic evocations: famous is, for example, the nostalgic memory of Francesca in Canto V of the Inferno “The land where I was born lies on that shore / to which the Po together with the waters / that follow it descends to final rest.”

The Reno is the longest river in Emilia-Romagna after the Po and is the most extensive in terms of surface area and flow among the watercourses that discharge into the Adriatic south of the Po. With its 211 km, it is the tenth longest Italian river and the sixth longest among those that flow into the sea.

The Reno is an important and vital river that has its source in Tuscany, in the province of Pistoia, and flows into the Adriatic Sea at Casal Borsetti, bathing the provinces of Pistoia, Prato, Florence, Bologna, Modena, Ferrara and Ravenna.

It has been a strategic area where cities and villages were built, and today almost two million people live along its banks. Its course is bordered by dense and productive industrial areas and vast and fertile agricultural expanses where in particular fruit trees grow.

Due to its geographical position and strategic importance, the river has always acted as a link between northern and central Italy, providing a safe passage between the Po Valley and the Arno basin.

The canal on the right bank of the Reno is a 37 km long drainage canal that derives its name from its position: in fact, it flows about 1 km to the right of the Reno River, following its course to its estuary.

Built from the 1880s onwards to collect sewage water from the province of Ravenna, the canal is nowadays essential for irrigating fields and is often a favourite spot for fishermen because of the numerous species of fish it contains.

These include the sheatfish, carp, carp, pike-perch, rudd, eel, bream, perch, catfish, chub, bleak, nase and mullet, the latter especially near the mouth.

In the early 2000s, the tourist port of Marina di Porto Reno was built near the centre of Casal Borsetti, connected to the sea by the last stretch of the canal. Access to the port is via a pedestrian drawbridge near the beach.

The Lamone River flows through Tuscany and Romagna to emerge near a charming coastal dune bordering the Pinewood of San Vitale.

It is flanked by a 35-kilometre route that allows visitors to discover the beauty surrounding its banks. It is a journey between past and present, between history and nature: the lush plains, the reclaimed valleys, the brackish lagoons, the centuries-old Pinewood of San Vitale and the flooded forest of Punte Alberete.

Alongside these landscapes it is possible to observe important specimens of various species of aquatic wildlife.

The river and its ecosystem, precious for the environment, have given life to a full-fledged open-air museum that combines nature and important heritage sites, such as Palazzo San Giacomo in Russi and the Museo della Civiltà Palustre in Villanova di Bagnacavallo.

Fiumi Uniti is the waterway, about 12 km long, that originates from the union of the Ronco and Montone rivers.

In the thirteenth century these two waterways came very close to the walls of Ravenna, surrounding it and then joining together and flowing into the Adriatic Sea. This proximity to the urban perimeter caused several problems for the city, which was repeatedly hit by floods, the most violent and destructive of which occurred between 1636 and early 1700.

The layout changed drastically in the 1830s: first of all, the confluence of the Ronco and Montone rivers, 2 km south of the town, was moved away with the construction of the San Marco lock to prevent new floods within the town perimeter.

From the San Marco lock, which is still visible, an artificial canal was built between 1735 and 1739, dug in the direction of the Panfilio – a second canal not far away – with the aim of intercepting the course of the Ronco and making it flow into the bed of the Panfilio canal, to then flow into the sea.

This work had major effects on the events and infrastructures of the city: the bridge over the Montone river was provisionally built with wooden planks but, in fact, remained so until just before the Second World War (and for this reason it is still known as the plank bridge).

Later, in 1748, other works led to the construction of the new canal, named Corsini in honour of the reigning pope at the time of the works (Clement XII, born Lorenzo Corsini, 1730-40), although for all the inhabitants of Ravenna it is called Canale Candiano.

The Bevano, whose springs are located near Bertinoro (FC), is a stream between the course of Fiumi Uniti to the north and that of Savio to the south.

The river meanders through the plain where it swells with water from ditches, agricultural drains and artificial canals, and then continues as it approaches the Municipality of Ravenna, where in ancient times there was a large swamp, the Valle Standiana, reclaimed at the beginning of the 1900s.

Almost at the end of its course it meets up with two natural drainage channels, the Acquara and the Bevanella, which end up flowing into its basin near the Pineta di Classe. Here, near the coast, is the Valle dell’Ortazzo, a naturalistic area of considerable interest also from an ornithological point of view: here, in fact, in addition to the remains of the abandoned twists and turns of the Ortazzino, flamingos, herons and stilt birds can be sighted.

The area of the Bevano estuary, included in the Parco del Delta del Po (Po Delta Park) over an area of about 40 hectares, is an unspoilt paradise of rare beauty: in this strip of land where the river flows into the Adriatic, a balance between fresh river water and brackish sea water has been preserved, made up of sand dunes, pinewoods and wetlands of great importance for biodiversity.

The river Savio has its source in Tuscany, more precisely in the Monte Fumaiolo range, where it springs from with the name Fosso Grosso.

It begins to be called Savio only after crossing the regional border: from here, its course crosses the towns of Bagno di Romagna and San Piero in Bagno, forming, a few kilometres further downstream, the Quarto reservoir. Finally, it reaches Cesena, where it flows through the city centre before entering the province of Ravenna.

At this point the river winds its way through a succession of twists and turns until it reaches Lido di Classe and Lido di Savio, where it flows into the Adriatic Sea.

Since the end of the twentieth century, the source of the Savio has been marked by an iron monument bearing the image of a wolf, symbol of Montecoronaro, and the rings of the caveja, symbol of Romagna, emblems of the territories through which the river flows.

All alongside the river is the natural park of the same name, home to a wide variety of wild birds and mammals. The unspoilt environment, the small towns along its course and the beauty of the surrounding landscape make it an ideal destination for excursions and walks, during which it is possible to see, near Sarsina, the imposing Marmitte dei Giganti, natural interconnected cavities built by the swirling waters.

The valleys of Ravenna