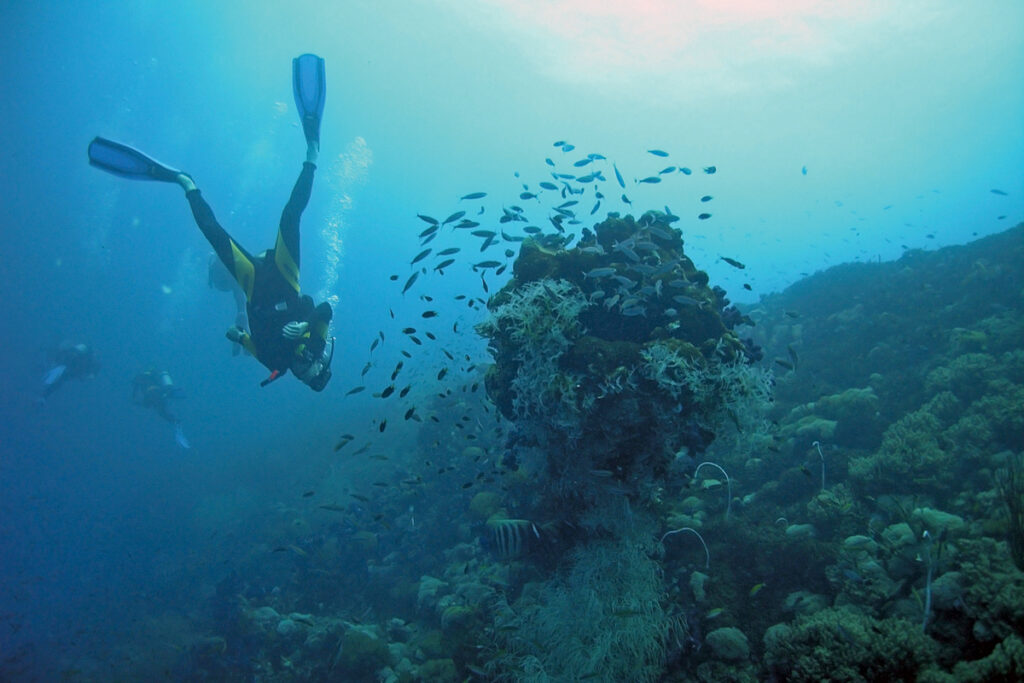 Between 1962 and 1963 Agip built a gas extraction platform in the Adriatic Sea off Porto Corsini, but it exploded in an accident while drilling a new well. The platform sank about 25 metres off the coast of Lido di Dante, 12 miles from the estuary of the Fiumi Uniti.

The wreck left in the sea, has transformed over time into a sort of artificial reef, around which a wealth of exceptional marine life has developed.

In 1991, the underwater area was further extended with new ferrous materials from six other decommissioned and demolished Eni platforms, attracting more and more diving enthusiasts.

In recent years, the wreck has become one of the most important centres of marine biology in the whole of the Adriatic, and in 2010 it was designated a Site of Community Interest by the Emilia-Romagna Region.

Many invertebrates such as starfish, sea urchins and serpentine starfish can be found in the platform area. Myriads of fish of all kinds have made their home here, and when diving, it is easy to encounter fish typical of the rocky sea bed, some of which are hard to find in other parts of the north-western Adriatic, such as croakers, saddled breams, murres, black scorpion fish, sea bass and conger eels.

In the blue sea, underwater tourists might even spot the cassiopeia jellyfish, the largest in the Mediterranean, but also come across the many red lobsters, rock lobsters and gurnards of all sizes.

As you descend, you will come across schools of blue fish, boga, mackerel, sardines, skipjack, mullet, sea bass and amberjacks. It is not uncommon to encounter dolphins, which have come in search of food.

Finally, on the muddy seabed, around the wreck, there are specimens of finfish, coelenterates, sea anemones and waxwings.

In view of the growing number of underwater explorers eager to admire this underwater naturalistic oasis, the Paguro Association was set up in 1995 to regulate diving and safeguard the biological protection zone.

Classis Ravenna – Museum of the City and of the Territory